Vivaldissimo for 2 trumpets and organ 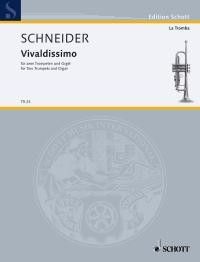 Instrumentation: 2 trumpets in high B (C) and organ (at least 2 manuals and pedal)

Introduction: Vivaldissimo is characterised by two elements: on the one hand, unproblematic pleasure in playing and adelight in virtuoso motoric movement and, on the other hand, the post-modern enjoyment of combi ning stylistic opposites. In the first move­ ment (Allegro), elements from Vivaldi's Concerto for two trumpets and strings are combined with the fast, repetitive patterns of new minimal music, naturally adhering to the original Baroque work's key of C-major. The second movement (Adagio) evokes the pastoral atmosphere of numerous Baroque concertos, but is based on a twelve-tone row (C-E'-D- FL A-O-B-F-E-B~-G-D~) which appears in a typical Vivaldi unisono passage at the end of the movement. The chromaticism of this second movement provides a transition to the G tonality of the final movement (Presto) in three-eight time. With the aid of motifs from both Baroque and minimal music, an atmosphere is created which is faintly reminiscent of the serenita of Nino Rota's music for the Italian Fellini films: unmistakable for gourmet cineastes.
The version with organ permits a more spontaneous performance in church venues (instead of the more extensive arrangements necessary for a performance with orchestra) and thereby adheres to the tradition of Baroque trumpet concertos as in works by ToreIli, Telemann or Pureeil which are also popular in versions with organ. For this reason, Vivaldissimo is also suitable for extensive performances in music colleges and conservatoires.