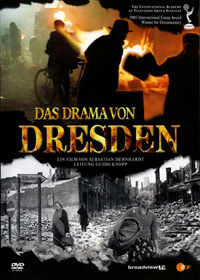 An elaborate documentary by Sebastian Dehnhardt and producer Leopold Hoesch (broadview-tv) from 2004 with play scenes and precise research. When the film received the coveted Emmy Award for "best documentary" in New York a year later, it was a big surprise, because the local film critics were reluctant to comment because the film was produced for the ZDF series "Zeitzeugen" by Guido Knopp... who was always accused of producing >mass production. - The film music is also elaborately produced with orchestra, but also with authentic samples of airplane, fire and war sounds.

Introduction: Won an EMMY in New York on the 22nd of November 2006 for Best Documentary Film