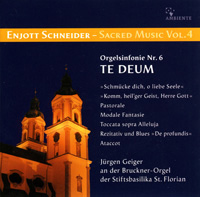 Jürgen Geiger plays the organ symphony no. 6 TE DEUM on the Bruckner organ in the Austrian monastery of St. Florian, dedicated to him, based on motives from Anton Bruckner's "Te Deum". In addition, he plays numerous other organ works, mostly based on chorale melodies, such as "Rezoitativ und Blues DE PROFUNDIS". But there is also a rarity, the work ATACCOT... the retrograde version of Bach's famous "Toccata". - The CD recording is extremely harmonious for me, since St. Florian is the monastery where Anton Bruckner is buried directly under the nave: with an opening, he was assured that even in death he would still be able to hear the sounds of the organ in his sarcophagus! And unforgettable for me as a composer: I was allowed to sleep the whole days of the recording in the famous bed made of copper frame, which his students had given him as a farewell present to St. Florian.

Detail about the compositions at www.enjott.com under WORKS