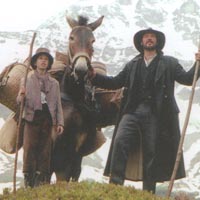 Although almost 20 years have passed since 2002, I still know dewy-fresh how this highly emotional film had an effect on me when I got it for dubbing: the VHS video was underlaid with the most opulent temptracks, such as the "Gladiator" music...and the impressive pictures and the intense story were able to withstand the force of this music perfectly! I was excited...and challenged! So this Goldrausch-Western from the Austrian Alps including an italo touch has become a film music which belongs to my outstanding works. The fact that the film is broadcast over and over again shows the power of the symbiosis of plot, image and music that has been achieved here. - All film data can be found below in the illustrations of the CD-booklet.