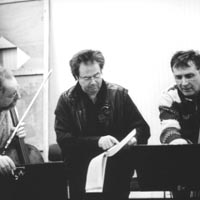 The work can also be performed as an orchestras symphonic dance without the castanet soloists.

Dedication: Dedicated in friendschip to Herbert Lampka (Madrid). It was his idea to compose a 'Castanet Concerto'

Additional remarks: The parts of four castanet soloists is so conceived that they can be played not only by special drummers, but also by four musicians of the Flamneco-Tradition/folklore. According to virtuosity, the solo part can be decorated, in addition, be formed even more like a virtuoso or also be simplified. Application of the feet can be included after the given measure. Also two musicians with hand applause can be taken, in addition, to the strengthening of the castanets. Choice of the castanets is free, e.g., four men or two men and two women. A light electric-acoustic strengthening (in the 2nd movement, perhaps, with sound effects effects / Delay ad libitum) is also possible. In the 2nd movement, four claves can be used for a change of timbres.