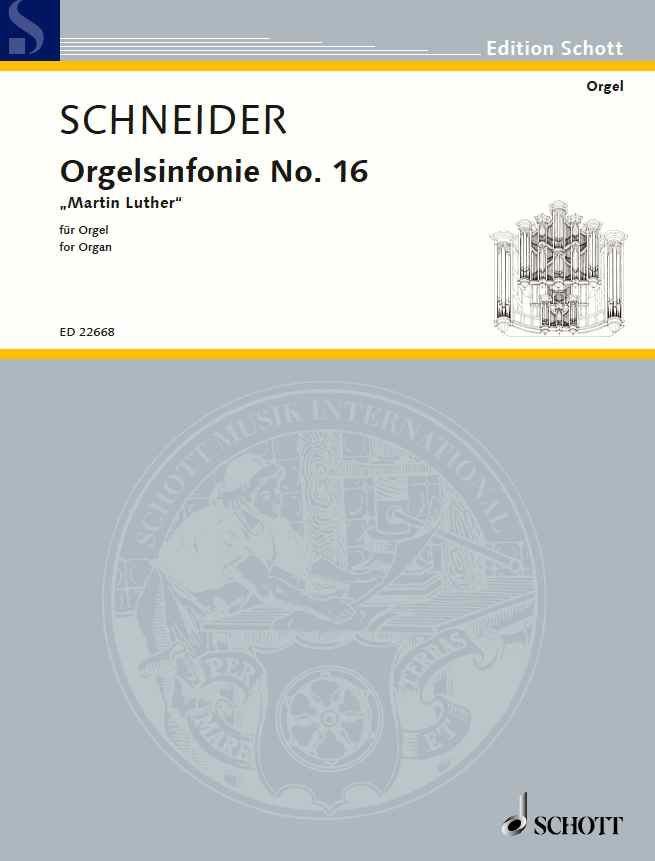 Instrumentation: Big organ with at least 3 manuals and pedal

Life and work of Martin Luther seem to be quite well-known and researched. Nevertheless, this man's immense life work is traversed by riddles and contradictions: as a man of spirit and pointing to the modern Enlightenment a lot of his business remained in the medieval Gothic dark. A man between God and devil, to which he remained bound by almost superstition. He seems to have been taken over a lifelong fear of witches, black ravens and demons from his mother. A person, who oscillated between silent mystical depth and sometimes fearlessness, which tended to be radical impulsiveness (associated with contentiousness and dogmatism) A person, who knew how to connect subtle idealism and abstract thought-through theory with grasping and a pragmatism that also captivates the common people. An approach to Martin Luther is attempted in five movements:
1: "We all believe in one God" appears very Gregorian by the quintuplet-like beginning and outlines the range of the Lutheran emotionality between medieval and modern times. The irrationality of the "faith" finally has priority over all thinking and evidence. At the beginning of the movement the wooden knocking sound reminds of the nailing of the 95 theses to the church door in Wittenberg. The choral melody is partially hidden in an almost rough medieval Saltarello. This melody refers to Luther's robustness and vitality, which especially entertained the common people.
2: Luther received the gold signet ring with the "Luther Rose" from electoral prince of Saxony at Coburg in 1530, which became a symbol for this theology of grace. A white heart with a black cross is surrounded by five petals, which are typical for a rose. To him "white" is the color of angels and spirits; the color "black" represents the pain of crucifixion: "The just will live through faith, but through faith in the Cross." As rose and heart dominate as superior symbolism, it is obvious how the Catholic Devotion to Mary remained an ingredient of the Lutheran spirituality during his lifetime. This movement is widely composed in the floating and poetic rhythm of a 5/8 meter analogous to the dominant rose structure of five petals.
3: The omnipresence of death and dying belonged to the essence of the contemporary worldview, starting from plague and wars, up to the never ending dangers of everyday life. This resulted in fears that could evolve grotesque shapes - shown for example in the paintings of Hieronymus Bosch. Luther's choral "In the middle of life we are/ embraced by the death" from 1524 ("Enchiridion" of Erfurt) is based on the Gregorian "Media vita in morte summus", which occurred in France around 750, and inspired a gesture in a simplistic manner by its evanescence thoughts.
4: That famous confession "I cannot help it/ here I stand/ God help me/ Amen", which was expressed during the Diet of Worms in 1521, is not Luther's wording, but the later version, which was heated-up as a flyer text. However, this boldly represents the directness and inevitability of his mission. It musically was transformed in a "perpetuum mobile" - i.e. a persistent, ostinato and never ending musical gesture.
5: The "solid castle" again is one of the great symbols of Martin Luther, which embodies the Protestant thought and willfulness of the Reformation by its shining C Major like no other song. Heinrich Heine called it "Marseille Hymn of the Reformation", Friedrich Engels called it "Marseillaise of the Peasants' Wars". This controversial nature is not thoroughly thought through, but rather broken: the finale with its jubilant “birdsong version” of its melody shows a rather chamber music aspect… the “idea of freedom of the Christian