Organ Symphony Nr. 8 & At The Edge Of Time 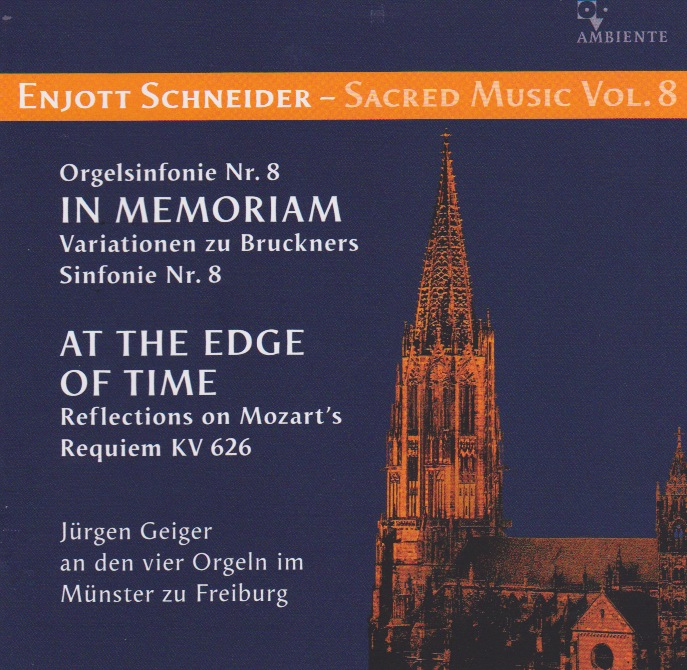 JÜRGEN GEIGER plays all four organs of the Freiburg Cathedral - it's an impressive symphonic space:

Introduction: AT THE EDGE OF TIME:
An ode to Wolfgang Amadeus Mozart: the keynote, movement patterns and motifs of the requiem KV 626 create and emotional meshwork. The way through this meshwork is paved by a simply melody (oboe). The wild central part, inspired by the rhythmicity of the „Dies irae“, escalates quickly, reaching shattering sound agglomerates and suddenly ending in complete silence, in a complete void: there is a long pedal tone that revives the music one last time and quotes Mozart's „Lacrimosa“… just as long and fragmentary as this final handwritten piece has been preserves. After this composition, he died: one can sense something like the ABGRUND DER ZEIT (The abyss of time). Composed in 2006, the Mozart year. (This composition was dedicated to Johannes Skudlik in 2006)


ORGAN SYMPHONY NO.8 "IN MEMORIAM"
It was the idea of the cathedral organist Silvius von Kessel from Erfurt to approach the otherworldly legacy in Anton Bruckner's (1824-1896) 8th symphony C minor in tho organ composition. „Wachet auf“ (Wake up), calls out the voice and this voice is the musical antagonist in this careful - and very admiring and respectful - approach of Bruckner: It is basically the 'home choral' of the 'Mariendom' cathedral in Erfurt, as the 'Erfurter Wolfram', the oldest bronze sculpture in Germany, has always been associated with the biblical Isaiah's 'Guardian on the pinnacle'. Based on the illumination of this choral in the spirit of Bruckner, the following dynamic set of movements was created:
Movement 1 METAMORPHOSEN (metamorphoses) introduced - almost without any sound changes - the main motif of Bruckner and deflects from that motif just like in a metamorphosis to extend the range of sounds while clinging to the popular motifs in order to achieve different variations of Bruckner's original motifs.
Movement 2 SCHERZO SINISTRO conjures a sinister atmosphere and refers to Bruckner's preference of the macabre, scary and the necrophile. He always paid attention to criminal cases in the press and attended several executions. He was also present when the coffins of Schubert and Beethoven were opened.
Movement 3 ADAGIO is based on darkly glowing triplet movements that Bruckner introduced during his lifetime as a quotation of the „Liebestodes“ (love death) of Wagner's 'Tristan & Isolde'. With this transcendent mood (based on a dedecaphony series), the choral „Wachet auf“ (wake up) can be heard for the first time at the end. That's what the voice calls out.

4th Mvmt FINALE: „WACHET AUF“, RUFT UNS DIE STIMME (Wake up, this voice calls upon us) combines the choral melodies with the memorable suggestive rhythm of Bruckner's finale - first in a dramatic minor key. In the central part, the choral glows softly and moves on to major key (flute 4’ in pedal). This mood was inspired by near-death experiences of resuscitated people who all spoke about a light and beautiful quiet music of angels. The movement ends virtuosically and powerfully with a ceremonial impetus, a typical Bruckner finale and finally with a glowing major key. (The composition was dedicated to cathedral organist Silvius von Kessel/Erfurt in 2008)

Performers on recording: JÜRGEN GEIGER plays all four organs of the Freiburg Cathedral