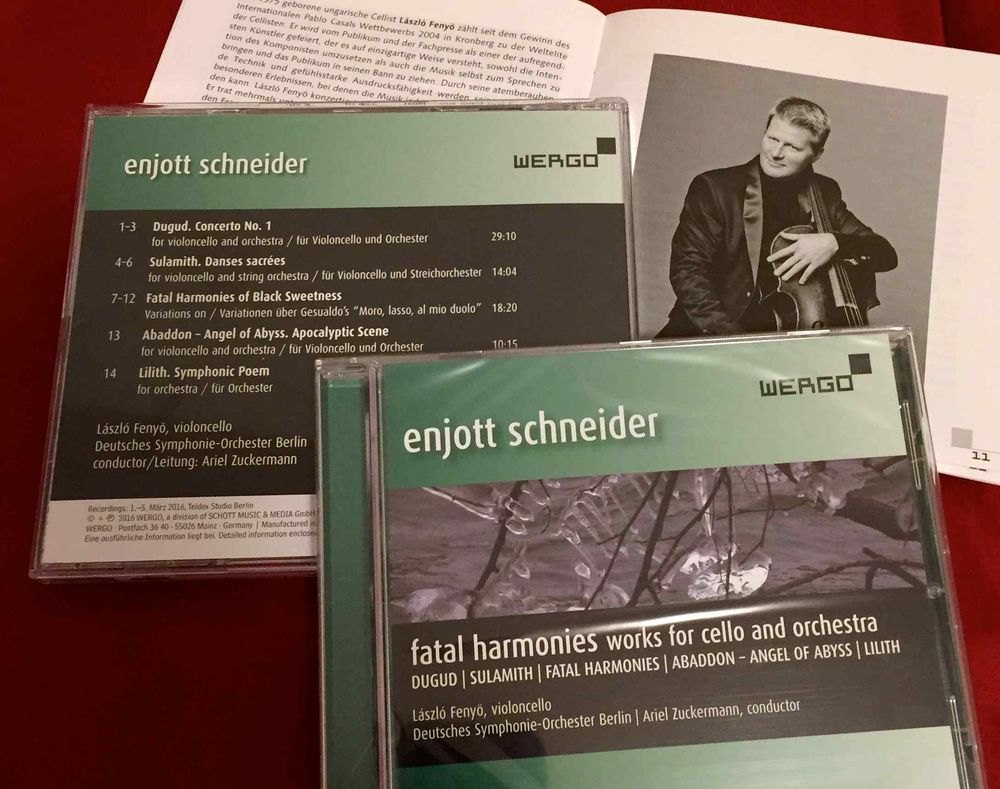 Besides the magic symphonic Poem LILITH – about the proto-woman of bible and mythologies – we find on this CD works for Cello & orchestra with the unique LÁZLÓ FENYÖ. He combines unfiltered emotionality with a stupende technique of cello playing and musical intelligence. The great concerto DUGUD stands on equal footing with more chamber music-like works as SULAMITH or the enigmatic variations on Gesualdo FATAL HARMONIES

SULAMITH Danses sacrées for cello and strings
4 I: „I am black, but beautiful“
5 II: The round dance of Mahanaim
6 III: The love is as strong as the death

Introduction: Enjott Schneider:
Between the magic of the Beautiful Sound and the virtuoso sound magic

In the 17th century, the spirit of opera led to the creation of an instrument modeled on the sound ideal of the bel canto tenor voice. an instrument intended at the time exclusively for solo expression and not for use in ensembles: the violoncello. In 1665, it was listed as a solo instrument in Giulio Cesare Arresti's Sonate a due e a tre. op. 4. Audiences, players, and composers - including myself – have been fascinated ever since. More than any other instrument the cello is equally suited to virtuoso technical ﬁreworks and the “singing” of melodic lines. The nearness of its timbre to the male tenor voice is unmistakable and results in an unparalleled expressive intensity. In the hands of a soloist with the mastery of László Fenyö, an explosion of expressive power is guaranteed.

The cello concerto Dugud was written for László Fenyö and is dedicated to him. Fenyö performed the premiere in 2011 as part of the Rutesheim Cello Academy with Christoph Adt conducting the Württembergische Philharmonie Reutlingen. “Dugud” was the Sumerian name of an ancient Middle-Eastern bird god – half eagle, half falcon. He was sometimes depicted with a lion's head and called "Anzu' or 'lm-Dugud'. He was known in Turkey as “Togrul” and in Hungary as ”Turu”. It was said that he sits in the tree of life above the spirits of unborn children. who also have the form of birds. In Hungarian mythology, Emese was impregnated by this bird, and her son Álmos became the ancestor of the Hungarian kings. My concerto for violoncello takes up some of these legendary images in archaic scenarios: the dark and erotic struggle between Emese and the bird god, the ethereal song of the unborn child, and the vision of an eagle's life of freedom.

SULAMITH. DANSES SACRÉES is also dedicated to László Fenyö, who played the premiere in 2014, again as part of the Rutesheim Cello Academy, with the Southwest German Chamber Orchestra conducted by Johannes Kiumpp. The “Song of Solomon". or "Song of Songs" is addressed to Shulamith, and is one of the most enigmatic texts in the Bible. If the figure of King Solomon himself is shrouded in mystery, this is even more true of the Songs “bride”. St. Augustine and other exegetes saw in the glowing sensuality of this text an allegory of the mystical marriage between the soul and God; others have been reminded of Arabic marriage rituals or have found connections to the ancient vegetation deities Ishtar and Tammuz. In the Gospel of St. John, there are many parallels between the Song of Solomon and the Resurrection of Christ, as when in the garden near Jesus's tomb a man whom Mary Magdalene believes to be a gardener, but is actually Jesus himself, speaks to her by name, “Mary”. And “she turned herself”, the Gospel says. The magnificent garden where Shulamith reveals her matchless beauty is brought into connection with Jesus and also the Garden of Eden: the garden is a metaphorical image that can be found throughout the Bible. Paul Celan gave one of the most modern interpretations of this image in his poem "Todesfuge' [Death Fugue] - written in Czernowitz in 1944 - in which Shulamith becomes the archetype of a Jewish victim. All these mysterious aspects become part of a sacred dance, where the physicality of dance encounters the existential subject matter in an apparently contradictory manner.

FATAL HARMONIES OF BLACK SWEETNESS is dedicated to the cellist Julius Berger, and was premiered by him in Herrsching am Ammersee on Palm Sunday in 2015 with the collegium: bratananium conducted by Johannes X. Schachtner.
Carlo Gesualdo (1560-1613) is one of the most daring as well as puzzling composers in history. Harmonically, his madrigals were unique in their time and point far into the future, even to the chromaticism of Wagner. The constant evocation of “death” and “pain” in these compositions has often been connected to Gesualdo's murder of his beautiful wife, Maria d'Avalos, and her lover. As a result of the murder, he fell into depression and isolation, and created a radical harmonic language that can only be understood in this context.
The present composition takes up the dark sweetness that dominates Gesualdo's madrigals and which is most apparent in Moro, lasso, Al mio duolo (from the 6th book of madrigals), published in 1613, the year of his death. The “Prolog” to my piece presents the bold harmonic progression C# major, A minor, B major, G major and uses it as a Leitmotiv. In the “Passacaglia della morte”, these chords become part of an eight-measure passacaglia theme. With its wavering, sliding harmonies and use of glissandos, this final music refers to one of the legends about the death of Gesualdo's son: the child was supposedly bound to a suspended basinet in the courtyard of the castle and forced to listen to choral harmonies for days until he ﬁnally died.
Of all the pieces on this CD, ABBADON, ENGEL DES ABGRUNDS [Abaddon, Angel of the Abyss] - once again composed especially for László Fenyö - requires the largest (and most virtuosic) orchestral forces.
In the Biblical context, “Abaddon” is a mysterious being, and he has also inspired Heavy Metal musicians and illustrators of Fantasy literature to create archaic and magical worlds of expression. The name is a combination of the Greek word "abaton' (meaning an enclosed space or pit) and the Hebrew word “abad” (meaning destruction, downfall, abyss). One finds this ﬁgure in the Old Testament in connection with Sheol, the realm of the dead (in the book of Job and in various Psalms such as Psalm 88:11). In the New Testament 'Abaddon' is the name given to the Angel of the Abyss, particularly in the 9th chapter of Revelations with its description of horror: “... And he opened the bottomless pit and there arose a smoke out of the pit… And there came out of the smoke locusts upon the earth; and unto them was given power, as the scorpions of the earth have power… And to them it was given that they should not kill them, but that they should be tormented ﬁve months… And in those days shall men seek death, and shall not find it; and shall desire to die, and death shall ﬂee from them… And their teeth were as the teeth of lions. And they had breastplates, as it were breastplates of iron; and the sound of their wings was as the sound of chariots of many horses running to battle. And they had tails like unto scorpions… And they had a king over them, which is the angel of the bottomless pit, whose name in the Hebrew tongue is Abaddon ...”
This surreal Biblical scene has been interpreted in wildly different ways. Many occultists have seen Abaddon as a powerful demon or even Satan himself. Others see him as the Archangel Michael, the slayer of dragons. Still others have even seen him as Jesus, since the 20th chapter of Revelations speaks of an angel possessing the key to the Abyss and able to throw Satan into the bottomless pit.

LILITH. SYMPHONIC POEM was commissioned by “Yehudi Menuhin, LIVE MUSIC NOW” and is dedicated “To the Memory of Yehudi Menuhin on the Occasion of his 100th Birthday.” The premiere took place on 1 May 2016 in the Augsburg Synagogue with Ludwig Schmalhofer conducting the Leopold Mozart Symphony Orchestra from the University of Augsburg.
LILITH is a mythological female ﬁgure who can be traced back to the Sumerians and who is mentioned in numerous cultures throughout the Middle East. She is a demon, and has also been interpreted as Adam's ﬁrst wife. One could “paint” her musically as a fantasy being, a seductive and mysterious woman - rather like Scheherazade. Lilith had her origins in Babylonian mythology as a Wind Spirit, a Night Ghost, or a Night Swallow. The only reference to Lilith in the Bible is in Isaiah 34:14: “And desert creatures will meet with hyenas, and goat-demons will call out to each other. There also Lilith, the night-monster, will settle, and ﬁnd for herself a resting place.” In the patriarchal tradition of Judaism and Christianity, Lilith has largely been ignored, because she was always a symbol of female emancipation and equality. She embodies in an archaic sense the powerful and dark side of femininity. Like many ancient goddesses, she both gives life and brings death.