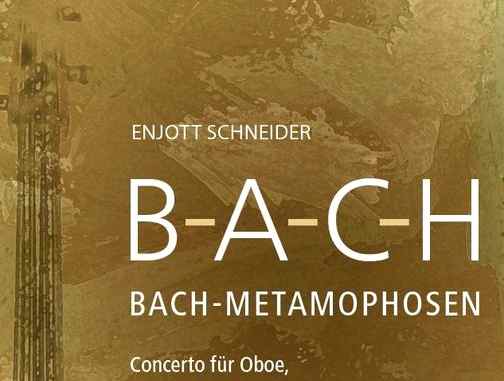 A Oboe Concerto with strings (and harpsichord or harp ad lib.) - and with quotings from adored composer J.S.Bach: from Saint John's Passion, Goldberg-Variations and with the B-A-C-H motif

Instrumentation: Oboe Solo, Harpsichord (can also be easily adepted by harp in a more symphonic context), and string orchestra (from single orchestration till to 10-8-6-4-2)

Introduction: The CONCERTO „BACH-METAMORPHOSEN“ not only plays with these famous four notes, but exudes the same radical and uncompromising aesthetics as Bach's music. The middle section of the Adagio paraphrases the introductory chorale „Herr unser Herrscher“ (Lord, our ruler) of the Passion according to St. John. The outer movements are based on the ostinato bass of the „Goldberg variationa“: when Johann Sebastian Bach was accommodated by Count Hermann Carl von Keyserlingk (Russian Ambassador in Dresden 1733-1745) in the year 1742 in Dresden, Johann Gottlieb Goldberg (student of J.S. Bach) was harpsichordist and 'chamber musicus' of the count. According to Forkel, Bach wrote his „Aria mit verschiedenen Veränderungen“ (Aria with different changes) for Goldberg, so that he could play it to Keyserlingk in his sleepless nights.
This composition with it's more traditional and historic orchestration can also be played with success in a purely "baroque style concert"

Additional remarks: Besides the version with string orchestra there exists also a version for Trio Oboe/Violoncello/Harpsichord, also published at Strube-Verlag Munich

Performers at world premiere: Landsberg a.L. in the framework of "Sommerkonzerte 1015" with Soloist Christoph Hartmann and soloistic strings; MOZART-FEST WÜRZBURG 2015 withAlbrecht Mayer and the Würzburger Philharmonikern