FLOWERS OF SPRING: STORIES FROM A COMPOSER'S LIFE

Photo collage 1: (left) world premiere of APOCALYPSIS in Jena, drums in the Paris' Theater, flight over the confluence of the Amazonas and the Rio Negro, (right) in front of the "Teatro Amazonas“.

The year 2016 was kicked off by an expressive soundtrack for the thriller ZDF-thriller called LIEBE BIS ZUM MORD (LOVE TO MURDER) - finally once again a consistently exciting movie (Director: Thomas Nennstiel)... Then as a contrast thereto, I ran a workshop at the German Forum for Choral Music as "composer in residence" in front of a hundred of curious choirmasters.

World premieres have had an ongoing impact on me: in March I travelled to Manaus to the legendary Teatro Amazonas, where Otto Sauter performed the world premiere of IKARUS. DESIRE FOR THE LIGHT in the world's most beautiful opera (Amazonas Filarmonia conducted by Alain Trudel from Canada)... Besides I was invited as "composer in residence" to the Amazonas University, where I has been appointed as honorary professor. Then in April the world premieres of CRI MUET at three theaters of Paris...in memory of the victims of the terror attacks in Paris on November 13, 2015, which was an urgent plea for Humanitas together with the variations of Beethoven's IX Symphony, which were also performed. Directly afterwards the world premiere of APOCALYPSIS. END OF TIME with the trombone quartet "Quadriga" (conducted by GMD Marc Tardue) in the Philharmonic Hall Jena. This truly was the sound-orgiastic apocalypse, which was celebrated by the audience and an enthusiastic press.

Not forgetting another highlight: in March my 7th Orchestra CD for the label WERGO was recorded together with the Hungarian cellist Laszlo Fenyö and the "Deutsches Symphonie-Orchester DSO Berlin" (German Symphony Orchestra Berlin) conducted by Ariel Zuckermann from Israel. Works for cello and orchestra. Pure musical pleasure. I cannot await the release of this CD.

By the way, the WERGO CD "SOUL PAINTINGS", which was released in December 2015 has just been the CD tip of the week at BR-Klassik and is currently sold at the Japanese CD retail chain Tower Records as "recommendation of the month"...

Cited from the editorial text of BR-Klassik:

"The present CD once more gives the impression that the most disparate resources are available to the composer Enjott Schneider and his major strength is to constantly control this - for many people- suspicious or even frightening diversity and render this diversity into the service of music. The whole provided with an entirely spiritual touch... His tonal vocabulary is thereby always comprehensible, making him always a suspect for the avant-garde scene while the broader audience adores him. Probably because he isn't at all stingy with modernity..." (Matthias Keller)

Photo collage 2: ...nightly composing (my composition demon watches me while I am composing CRI MUET!) and almost weekly publications of new music printings. 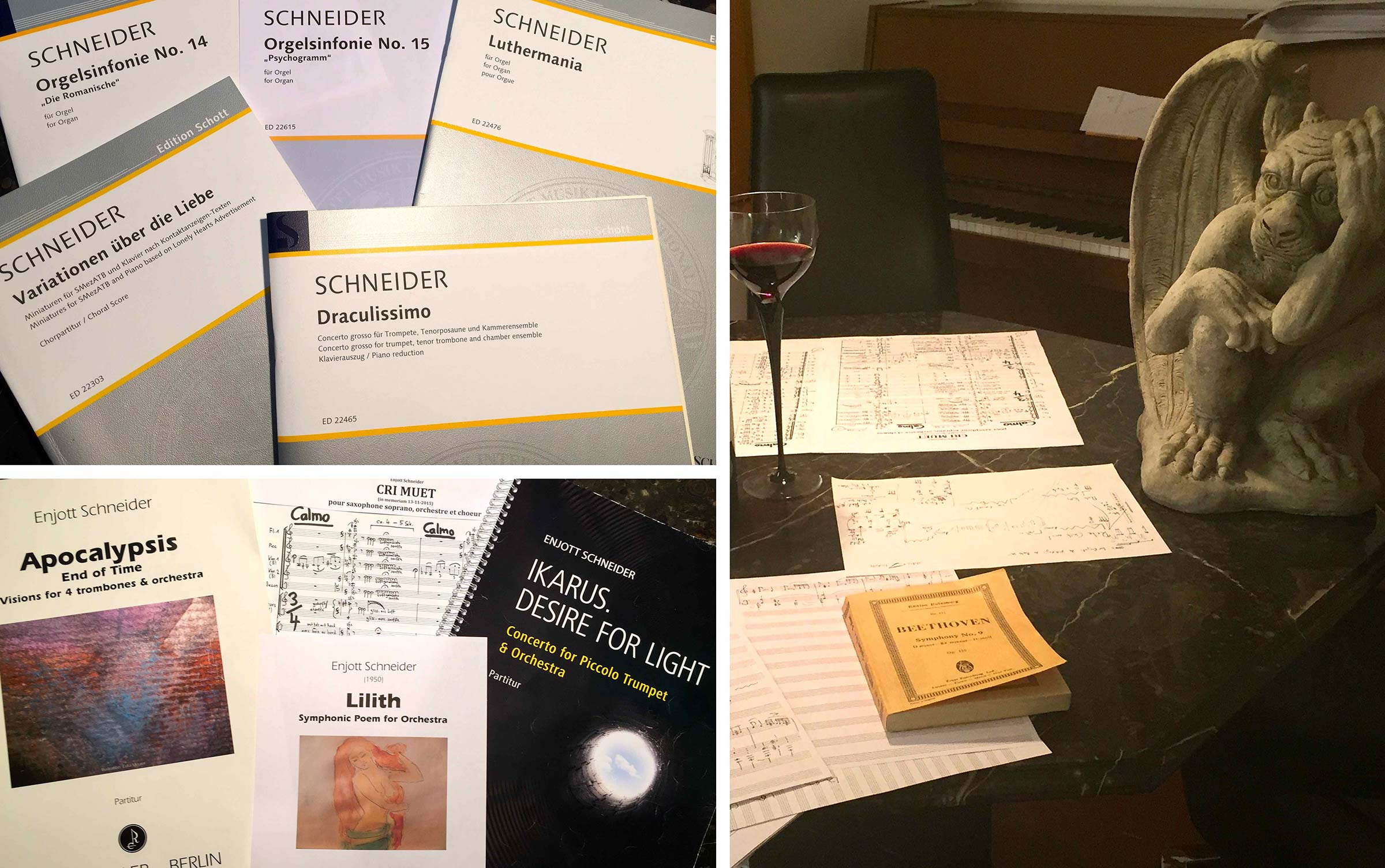