Meditation for organ and tape recording 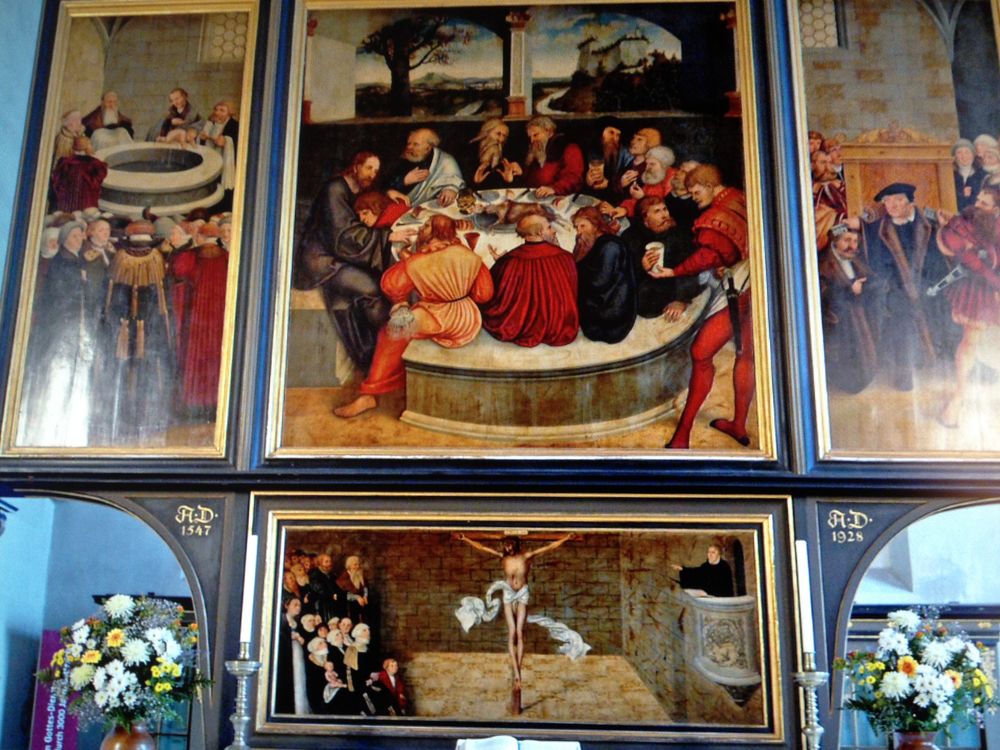 Instrumentation: organ (preferably with three manuals) and tape recording (if possible, a good stereo sound system should be used with speakers positioned at a distance of about 8 - 10 meters). Tape recording obtainable from the composer on CD or as an audio file (pitch available in 443, 441, 440, 438 Hz).

The composition refers to the famous altar that Lucas Cranach d.Ä. (1472-1553) created by the order of Martin Luther in the city church St. Marien in Wittenberg and that was inaugurated in 1547. The altar shows the the sacraments of the confession, the baptism and the Lord's supper in the three parts of the triptych and in the load-bearing predella, it shows Luther as the preaches in from of the cross.
The motif of the meditation is based on a dodecaphony series that partially incorporates or confronts reformation chorals: „Aus tiefer Not“ (From great hardship)(Luther) in „Beichte“ (confession), „Christ, unser Herr zum Jordan kam“ (Christ, our Lord came to the Jordan) (Luther) in „Taufe“ (baptism), „Christ lag in Todesbanden“ (Christ laid in the arms of death) (Luther) in „Predigt“ (sermon) and „Christe, Du Lamm Gottes“ (Christ, you lamb of God) (Luther) in „Abendmahl“ (Lord's supper).

Ideally, a visual vision (slideshow or powerpoint presentation) of the altar and its parts and details is shown in addition to the sound of the organ (played live) and sound recordings. The result - especially at night in a dark church - are very emotional images that will appeal to the people holistically.