THE CENTURY WAR: THE STORM 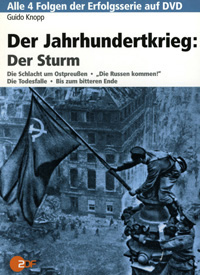 A four-part documentary about the storming of Russian troops and the conquest and capitulation of Germany. In interviews and with elaborately researched documentary film and image material, the civil catastrophe at the end of the Second World War is traced.

Performers on recording: DVD released in 2006 with ZDF Video/Universum-Film with Sony Music Entertainment