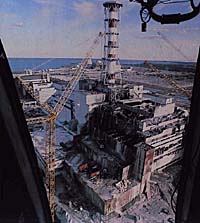 Instrumentation: six voices a capella (S A T T B B)

Introduction: ...the first newspaper reports and state-official announcements immediately after the reactor accident in Ukrainian Chernobyl in respect with a three-verse evening song become 'The day now has passed and darkly there sleeps the world' of the romantic writer Ernst Moritz Arndt (26.12.1769-29.01.1860). The naive romantic tone appears after the aggressive professionalism of the newspaper news while sounding in the first stanza still like a foreign body, these circumstances turn round increasingly: the official announcements become increasingly empty words, - the message of the romantic poem with his child faith in the 'father' as a God prevailing on top becomes against it the real 'news'

Additional remarks: Ironic, aggressive work, can also be staged in the form if musical theatre with 'newspapers' as percussion instruments of each singer