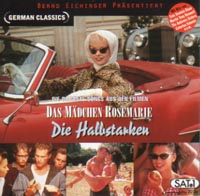 The "Mädchen Rosemarie" (1995/96) was the first major directorial work of the unforgettable Bernd Eichinger, after he became an internationally successful and influential film producer. It is the story of the noble prostitute 'Nitribit' (portrayed by Nina Hoss as her fast-paced and steeply rising film debut), who in stuffy and bourgeois post-war Germany roughed up the men of the financial elite...and paid for it with her life.
A brilliant film with a star cast, - one of my favourite works in the field of film music!

Additional remarks: Soundtrack for the film 'The Girl Rosemarie' (Constantin-Film, director: Bernd Eichinger) with the 'Rosemarie -Waltz' by N.J. Schneider