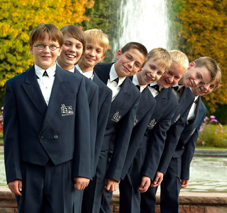 The exciting in a boy Chor, directed by Helmut Metzger. 180 min. in 6 parts. With Peter Fricke, Udo Weinberger, Maria Peschek among others. Music, choir-life, Pranks from the sphere of a successful boy's choir. Episodes: THE NEW, THE SNAKE HUNT, NICK IN DANGER, ROBERT IS GONE, KONRAD GOES CRAZY, THE GOLDEN DRAGON. The choir playbacks were produced with the Regensburg Boys Choir (conducted by Roland Büchner), the soundtrack or 88 minutes was created in 'Augenklang' recording studio and in the Arco-Studios Munich (with Ozzy Schaller, guitar). Theme music electronic arrangement by Martin J. Grassl