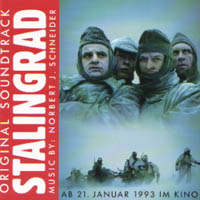 For the anti-war film STALINGRAD by Jospeh Vilsmaier, a monumental film score was composed in large symphonic orchestration. In addition, occasionally an electronic percussion based on sampled "steel and metal sounds" (programming: Martin Grassl). The music was elaborately recorded under the direction of Enjott Schneider with members of the Munich Symphony Orchestra.