for string orchestra and tape recording 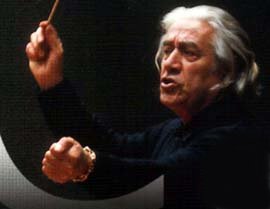 Instrumentation: String orchestra and tape recording. (an audio file or CD is available with the sheet music to be mixed with the live orchestra on a good stereo speaker system)

Instrumentation: string orchestra and tape recording
(an audio file or CD is available with the sheet music to be mixed with the live orchestra on a good stereo speaker system)

A warm dedication to Mark Mast, the conductor of the premiere


There is a deeper reason, why NATURKLÄNGE – HOMMAGE À CELIBIDACHE refers to fragments by Claude Debussy (1862-1918). It is much more than a mere coincidence that Sergiu Celibidache (1912-1996) was born exactly 150 years after Debussy, whose 150th birthday we celebrate in 2012: both musicians share a kinship by choice that is best characterised by the cypher 'nature'. As a conductor, Celibidache was always looking for the nature of phenomenal (orchestra) sounds. Debussy's sound language was the attempt of a lifetime to „read in the book of nature“ and to make natural emotions audible. Jean Cocteau therefore had every right to write about this composer: „thousands of undefined miracles of nature have finally found their translator“. In his essay „Musik im Freien“ (music outside)(1903), Debussy dreamt of a music that would float over the tree tops in clear, free air.
Celibidache's quirk to indulge in the world of sounds of the orchestra when time stands still and to prefer extremely stretched tempi, matches the 'impressionism' that Debussy found: this style especially defines a time dimension, - the 'condition'. Debussy never displayed dramatic processes and movements, but deepened timeless conditions, such as the whispering of the wind, the sound of the waves of the ocean, flickering air, rustling leaves.
In this spirit, my birthday composition focuses on two fragments of Debussy's work - recorded as the interpretation by Celibidache with the Munich Philharmonic Orchestra (released by EMI Classics and used with the friendly permission): The introductory beats are from „La Mer“ (1903-05), where the dawn is the topic in „De l’aube a midi“, and the beginning of „Les parfums de la nuit“ from „Iberia. Images pour orchestre“, that was composed in 1905/06 shortly afterwards.
Based on the two sound models, building blocks of music are associated that do not comply with any system or logical development, but create a space of the unknown: Simple intervals and sound layers grow organically, proliferate (inspired by Debussy's note text and Celibidache's interpretation) and become more dense to create movement patterns, sound textures, iridescent surfaces. There are points where the sound recording includes the sound of the waves of the ocean, (recorded at the beaches of Rügen island, 3rd of September, 2012) - it is not only about the idyllic immersion in the magic of nature: some parts of the composition refer to nature being threatened and destroyed by the brutal commercial exploitation ... It turns the composition into a requiem.

Dedication: A warm dedication to Mark Mast, the conductor of the premiere