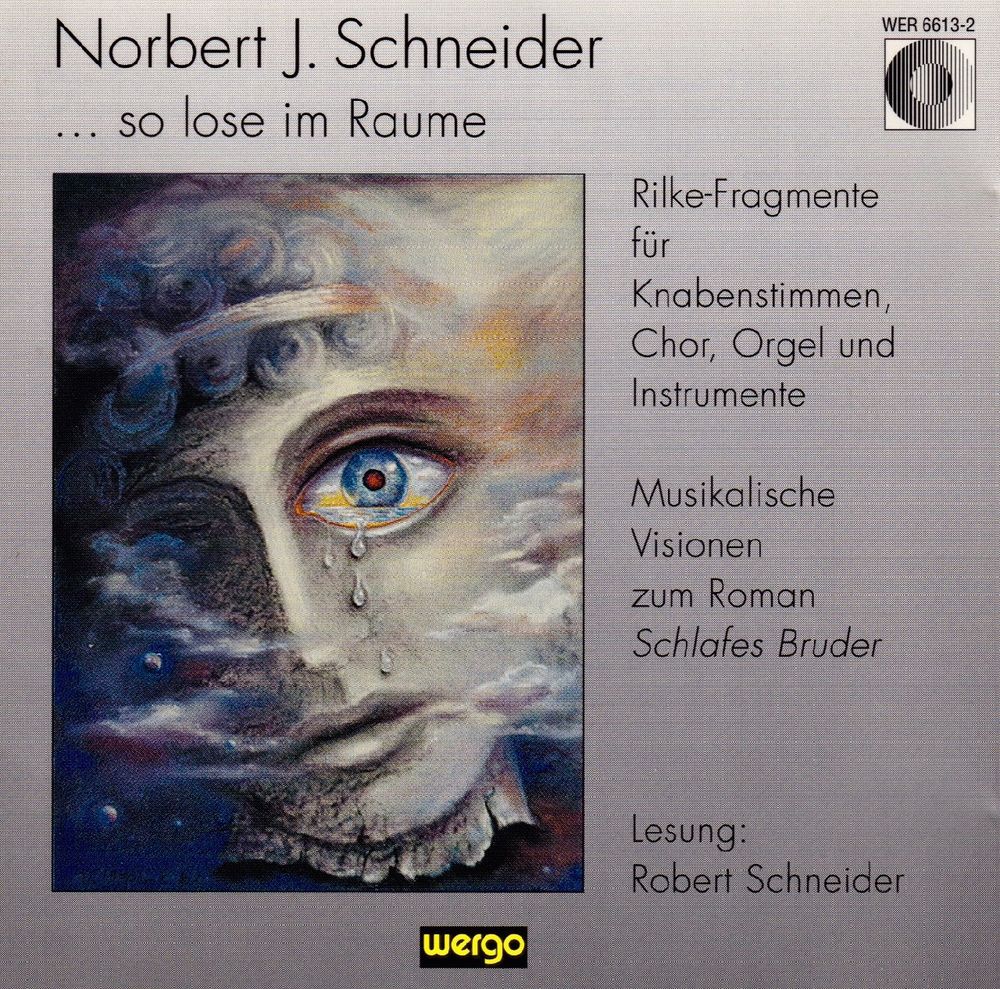 ...SO LOOSE IN THE ROOM. Rilke fragments for boys' voices, choir, organ and instruments (1995). Four musical visions for the novel SCHLAFES BRUDER. Robert Schneider with readings from his book, was recorded in 1996 with the Orpheus Choir and Orchestra Munich (conductor: Gerd Guglhör) for WERGO-CD in co-production with the Bavarian Radio.
The desire to set Rainer Maria Rilke's "Duineser Elegien" to music coincided with his work on the film "Schlafes Bruder". Since this associative connection was also fully in line with the ideas of Robert Schneider, the auteur of the novel "Schlafes Bruder", it was possible to use it for readings: Thus one has the unique opportunity to experience important passages of "Schlafes Bruder" on this CD as an author's reading.

Introduction: The desire to set the "Duineser Elegien" by Rainer Maria Rilke to music coincided with the work on the film "Schlafes Bruder". Since this associative connection also fully corresponded to the ideas of Robert Schneider, the author of the novel "Schlafes Bruder", it was possible to draw on this for readings: Thus one has the unique opportunity to experience important passages of "Schlafes Bruder" on this CD as an author's reading.
With Robert Schneider as well as with Rilke, man stands alone in the field of tension between love and God. For both of them, "childhood" is an important cipher: "Childhood" is the place where each person is closest to both love and God. Childhood is the golden space, the contours of which we have to search again or forget for a lifetime. (See also the detailed information on the CD-booklet, which can be read well by clicking on the photos below).
In the fourth movement, the famous organ toccata from BROTHER SLEEP resounds, which is now devastatingly heightened by the choral singing (to the organ pedal) and by the sound of the trumpet. Harald Feller, who also played this toccata in the film SCHLAFES BRUDER, is also the soloist of this virtuoso organ work.