Horsemen of the Apocalypse for 4 organs, 4 trumpets, 4 horns 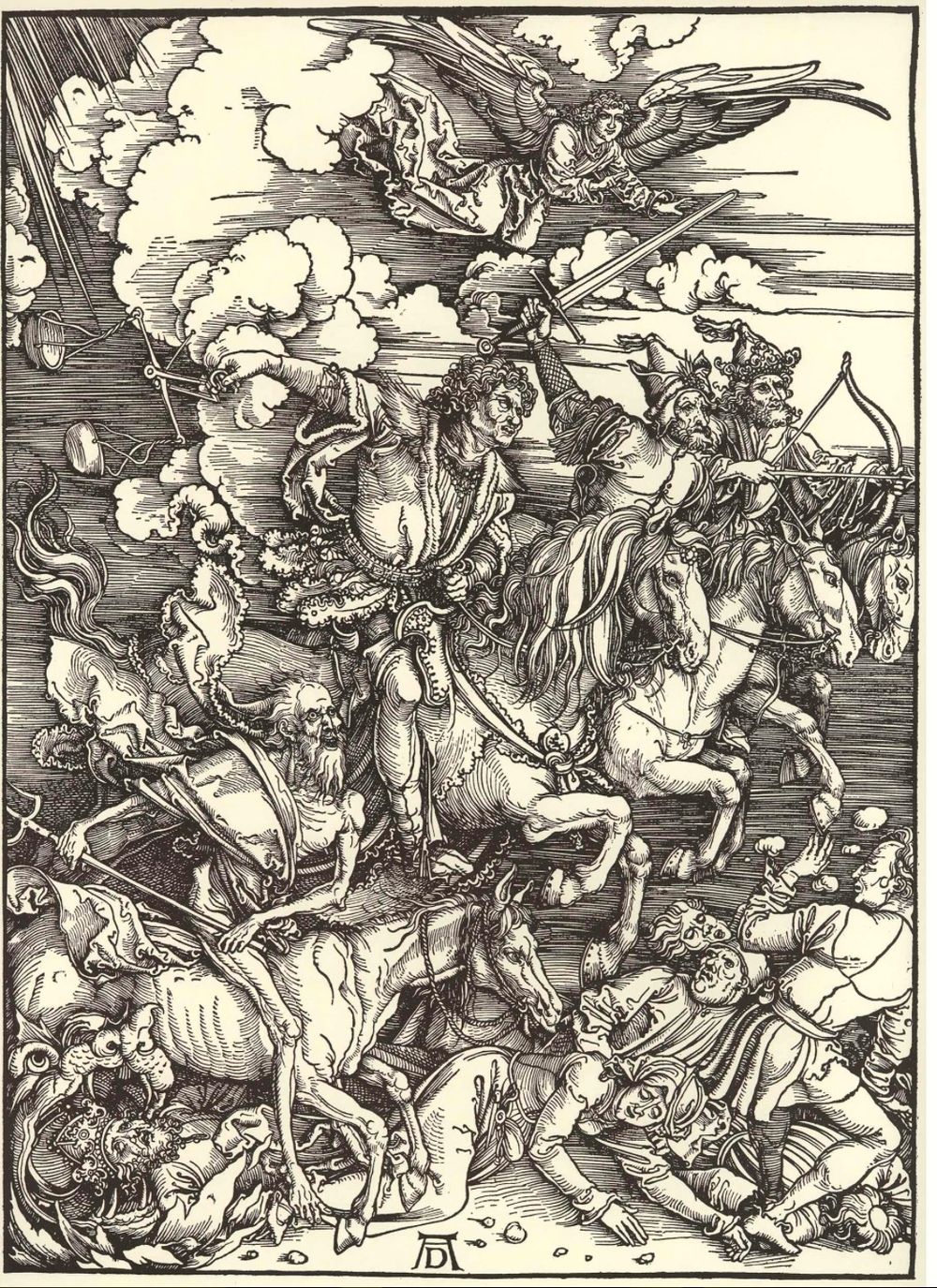 Movements: PROPHECY - The four horsemen of the Apocalypse
for 4 trumpets, 4 french horn and 4(2) organs,
(flute, strings and timpani ad libitum)

Instrumentation: The composition is essentially written for 4 trumpets (1 piccolo trumpet in Bb and 3 trumpets in Bb), 4 french horns in F and 2 organs I and II (one central placed organ with pedal and one smaller organ beside).The score gives the opportunity to add facultative two other organs (in this case the organ players I and II have to omit the indicated parts of organ III and IV). There are further parts (ad libitum) for flute (piccolo flute changing with large flute), for timpani and for a string section (vl1, vl2, vla, vc), soloistic as string quartet or as string orchestra).
The 4 hornplayers have also to play „percussion“ with stones (each one two little stones in the hands); the 4 trumpet players have also to play „percussion“ on metal sounding instruments (trinagles, bells, fingercymbals).

Introduction: The revelation of John shows the image of four horsemen as messengers of the imminent apocalypse in chapter 6. When the book with the seven seals is opened by 'the lamb' (a symbolic description of Christ), a horseman with symbolic attributes and frightening characteristics after each of the four seals is opened and after calling out 'Come!'. In between - just like on a tranquil island in the middle of martial scenery - 'oil' (a symbol for the Holy Spirit) and 'wine' (a symbol for the blood of Christ) are mentioned - elements that must not be harmed. This indicates a positive outcome.
- The first horseman on a white horse embodies purity and justive and carries a crown and a bow (the most far-reaching weapon of the ancient world). He announces the beginning of war and the imminent plagues.
- The second horseman on a blazing red horse symbolizes blood and massacre, he carries a sword and announces violence.
- The third horseman appears on a black horse and holds a scale in his hand that announces increase in pricing, hunger and imminent inflation.
- The fourth horseman appears in a sallow horse (the original text calls it 'chlorus' = green) und he has always been interpreted as the horseman of death, announcing disease, plague and downfall.
The four horsemen drastically announce the horrors of the final days of mankind and the upcoming kingdom of heaven. That's how they call for victory of Good against Evil. This archetypal and striking dramaturgy has fascinated people through the ages - from the Middle Ages to the times of Albrecht Dürer's famous woodcarving (1497) and modern fantasy movies and computer games. It also inspired many artists who created expressive works.
Especially today, where times are defined again by terror, war, torture and murder, the apocalyptic idea is more present than ever and there is that infinite hope that God is just and that he will end all abhorrence, give people hope and that the Good will defeat the Evil.
This composition allows the listener to feel all of those emotions: the quadruple „Come!“ during the opening of the seals with the characteristic horsemen, the tranquil island of 'oil' and 'wine', the turbulence and chaos of the final days ... and then the hymn-like believe in the Good.

Dedication: Dedication:
RESPECTFULLY DEDICATED TO THE CITY OF GDANSK,
WHERE THE „SOLIDARNOSC“ HAS BEGUN……

Additional remarks: This composition is a commissioned work on the occasion of the Polish Solidarnosc Day. The apocalyptic atmosphere of the DIES IRAE therefore gives way to the emphatic hymn to 'the Good' in the finale.

There is a preview scheduled for the 20th of July, 2015 at the Landsberg Organ Gala - Mariä Himmelfahrt Church