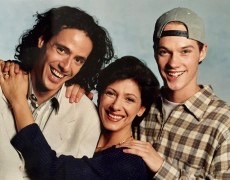 In 1995, as composer of the daily soap "Marienhof" ARD, I switched to the new ZDF series JEDE MENGE LEBEN and set all 376 episodes to music, - a mammoth work alongside concert works and film music such as "Schlafes Bruder" or "Mädchen Rosemarie". It was the first daily series production of the ZDF, produced by Colonia Media Cologne. - It is the family history around the doctor Dorothee Berger (Olivia Silhavy) and her two sons Julian (Markus Pfeiffer) and Nico (Matthgias Schloo)...and endlessly many other actors. Directors were Gudrun Scheerer, Carl Lang, Norbert Skrovanek, Klaus Wirbitzky and others.