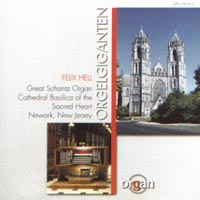 The organ virtuoso Felix Hell (*1985), who now lives in the USA, listened to Enjott Schneider's famous Toccata in the centre of the film "Schlafes Bruder" (directed by Joseph Vilsmaier) when he was ten years old and was so fascinated by this piece that he recorded it as the final piece on this CD when he was fifteen: a very virtuoso interpretation on the CD ORGANGIGANTEN on the great Schantz organ of the Cathedral Basilica of the Sacred Heart Newark, New Jersey.

Introduction: Felix Hell at the Cathedral Basilica of the Sacred Heart Newark, New Jersey. On it by Enjott Schneider: Toccata 'Sleeping brother'.
-----------
The photo below shows Felix Hell 20 years later together with Enjott Schneider in Heidelberg...again on the occasion of a performance of the TOCCATA SCHLAFES BRUDER, which he now has in his repertoire by heart and with stupendous bravura - unprecedentedly stunning.