IN MEMORIAM Variations on Anton Bruckner's 8th for organ 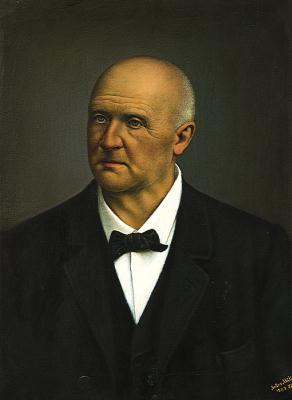 Introduction: The idea of an organ work to commemorate the legacy left by Anton Bruckner (1824-1896) in his 8th Symphony in C minor was put forward by Silvius von Kessel, organist at Erfurt Cathedral. This careful homage to Bruckner - informed by great admiration and respect - finds a musical counterpart in the Sleepers wake, a voice is calling. This is regarded as the 'house chorale' of the Cathedral of St. Mary in Erfurt, as 'Wolfram of Erfurt', the olders bronze statue in Germany, has always been associated with the 'watchman at the top of his tower' described by Isaiah. Illuminating this chorale in the spirit of Bruckner has resulted in a dynamic sequence of movements:

Movement 1:
Metamorphoses introduces the main theme from Bruckner´s 8th Symphony - at first almost unaltered - and derives further musical developments from it in a kind of metamorphosis where favourite devices are playfully worked into a series of variations on Bruckner's motifs.

Movement 2:
Scherzo sinistro conjures up a sinister atmosphere, echoing Bruckner's liking for the macabre, ghoulish and necrophilic. Bruckner took a close interest in reading newspaper reports of criminal cases and attended several executions. He was also present at the opening of the tombs of Schubert and Beethoven.

Movement 3:
Adagio is built upon darkly glowingtriplet figures, like those previously introduced by Bruckner in a quotation of the Liebestod theme from Wagner's Tristan and Isolde. Emerging from this transcendental atmosphere (built on a twelve note series), the chorale Sleepers wake is heard for the first time at the end of this movement.

Movement 4:
Finale 'Sleepers wake, a voice is calling' combines the chorale melody with the incisive syncopated rhythm of Bruckner's finale - initially in a dramatic minor setting. In the middle section the chorale shines through, tender and enraptured, in a major key (4' reed pedal). This mood was inspired by near-death experiences of people who have dies and been brought back to life, all of whom tell of a light and wonderfully soft angelic music. With the solemnity of a typical Bruckner finale the movement has a powerful virtuoso ending in a bright major key.

BEAMING END IN A MAJOR KEY... in four movements, the spiritual legacy of Bruckner's very dynamic register bring the composer and organist carefully closer to the theme. A little strangeness was to be felt with this difficult organ work, however, with the citation of the chorale 'Wachet auf, ruft uns die Stimme' ' and the dramaturgically important major key the composer grounds the piece, which was taken in well by the audience.