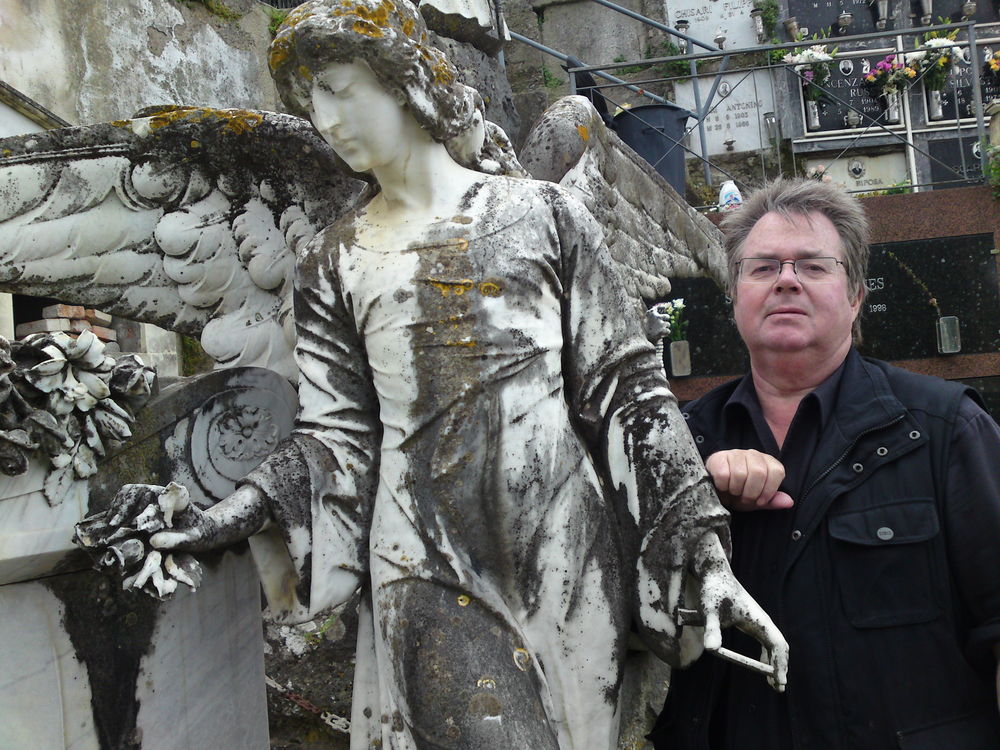 Introduction: Organ symphony No. 5, the 'Angelus', represents the mysterious and fascinating world of the angels, depicted in many religions from India and Africa to Europe as messengers who facilitate communication between God and mankind. The book of Genesis in the Old Testament first calls the angels 'Mal'ach', literally, 'messenger', describing them as having something resembling human form. The idea of 'winged creatures' emerges later on in the development of Jewish mythology and is nowadays closely associated with popular mythology (guardian angels).
In a book first published in 2006 as The Watkins Dictionary of Angels Julia Cresswell presents a clear overview that points out links to islamic and classical mythology. Marco Bussagli details iconographic references drawn from the graphic arts in Angeli-Origini, Storie e Immagini delle creature celesti, Milan 2006. Heartfelt thanks go to Dr. Iris Winkler (Inglostadt) for advice given during the composition of my 'Angels Symphony'.

The first movement Jacob´s Ladder (Genesis 28, 12-14) is a prologue based on Jacob's dream, the vision of a ladder with angels climbing up and down from Earth to Heaven. It uses toccata-like figures leading up to the glorious light, followed by a quotation from the ancient chorale 'Es sungen drei Engel' (Three angels were singing) (text 1278; melody 1605)

The second movement, The Archangel Gabriel: Banishment and the Annunciation marks the true beginning of this 'Angel Symphony' with a powerful main theme representing the 'banishment from Paradise' (Genesis 3, 23-24) and a second theme representing the angel's greeting and the annunciation of Christ's birth to Mary (Luke 1, 26-38). The predominant mood of power and strength with the 'flaming sword' of the Cherubim ('Gabriel' means 'man of God' or God is my strength') is contrasted with the Marian hymn 'Ave Maria gratia plena Dominus tecum'.

The third movement Abaddon, the Angel of the Abyss (the Apocalypse of John 9, 1-3 and 9-11) is a powerful Scherzo evoking the archaic and reminding us that 'sngels' are not just kindly beings of folk mythology but also represent the darker side of existence. The hierarchy of angels includes a large number of angels of death; even Satan and Lucifer were fallen angels. Abaddon holds the key 'to the shaft descending into the abyss', where demons crawl out of the smoke with 'tails and spines like scorpions'.

The fourth movement depicts Cherubim and Seraphim: Gloria in excelsis Deo (Isaiah 6, 2-3; Psalm 148, 1-3, Psalm 150, 1-6). The Seraphim are generally considered to be the highest ranks of angels, usually with six wings (a pair to cover their faces, a pair to cover their feet and a pair for flying). They are 'blazing' and dazzling creatures. The Cherubim (from the Assyrian 'Karibu': one who prays) are the second highest category of angels and thus rahter closer to humans; they are also described as having six wings, but able to take on any shape - from human form to wind, fire or wheel. They frequently adopt the role of wise guardians. The chief function of both ranks of angels is to praise God, as they do in the Te Deum or in the Eucharistic prayer with 'Sanctus, Sanctus, Sanctus', or in a perpetual Gloria in excelsis Deo.

The fifth movement, The Angels of the Apocalypse: with fire and the sound of the trombone is a toccata-like rondo that communicates something of the potentially destructive power and boundless veneration of God - verging on the irrational. This movement culminates in the ancient chorale 'Es sungen drei Engel', establishing a cyclical link with the first movement of this symphony.

Dedicated to Franz Hauk (Münster Ingolstadt), an indefatigable interpreter of my organ works


Sombre organ symphony.
What a misapprehension. Heavenly creatures are predominantly different and are not as harmless as we always thought. It was cleared up who visited the main concert of Ingolstadt organ days in the Liebfrauenmünster cathedral. Enjott Schneider's, particularly known for composing film music, organ symphony 'Angelus' was performed by Franz Hauk: a war horse of an organ piece, as powerful as Bruckner's symphony, deep and somberly thunderous as the apocalypse. In the 45-minute, five movement work there is no ease, no charm and no wit. Enjott Schneider.... did theological research and based the work on particular passages from the bible and certain angels. Out of this, five musical portraits were created. Nevertheless, the overall flow is consistent... In the concluding movement 'The angels of the apocalypse' finally, it comes to the final Tohiwabohu, a crashing orchestral organ painting, the end of the world from a hundred pipe organ while an old hymn is cleverly integrated.
Pure celestial pure song: From the sombre frame of the organ symphony the short fourth sentence 'Cherubim und Seraphim,' stands out, a piece in descant, as pure and heavenly sounding as a glockenspiel.