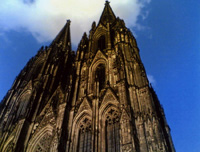 For cathedral organist Winfried Bönig, the organ symphony no. 4 SINFONIA COLONIENSIS - dedicated to him - was composed to accompany the repertoire on the mighty Klais organ of Cologne Cathedral. In an expansive 35-minute work, it varies a Gregorian chopral, which is sung especially for the Cologne Cathedral and worships the Magi who are buried there.

Introduction: The first movement, Invocatio, is a powerful appeal to God and his saintsasking for blessing. The musical structure of this invocation is based on a motif fram the Gregorian chant for the feast of Epiphany, Tria sunt munera':this establishes an association with Cologne, a city that long aga housed thousands of holy relies.
Th e second movement, The Three Kings, is a triptych based on the chorale 'tria sunt munera' (see p. 64). Its translated meaning is: 'The wise men brought three preeious gifts to the Lord that day. These contained holy mysteries: gold symbolizing the power of the king; ineense to honour the high priest and myrrh for the burial of the Lord' . This is the souree of the tripartite strueture of these variations: 'maestoso' - 'misterioso' - 'mesto'.
The third movement, Colonia Sancta (proeession of the holy relies), is in the tradition of the Cortege, musie to aecompany a liturgical procession. Such pracessions of prayers and reHes were an important part of the eultural history of Cologne: holy objeets (including relies, coffins, shrines, statues and crosses) were carried thraugh the 'holy city' in aseries of triumphal parades. Especially in times of need, these holy relics would be carried from the churches along the streets to the cathedral, and participants in such proeessions of relics would be granted generaus indulgences. To reflect this practice, the third movement is marked by a persistent stepping rhythm that builds up towards a ritual expression of ecstasy in the middle and then fades away again.
The fourth movement Ex ossibus: st. Ursula pro nobis ora relates to the legend of St Ursula, the patron saint of the city of Cologne: the Clematius inscription on a stone tablet in the ehurch of St Ursula, dating from 410, is the earliest evi­ dence of a eult of the Virgin that can be traced back to the martyrdom of eleven virgins, led by St Ursula, who were killed by the Romans for the sake of their faith. The discovery of a giant fjeld of graves then gave rise to the legend of the killing of 11,000 virgins, 'passio sanctuarum undecum millium virginum', a story that was popular in the Middle Ages andbeeame widely known in Europe. Even today, innumerable bones can still be viewed in the ossaria (eharnel­ houses) of St Ursula - some of them arranged to form prayers such as 'Saint Ursula, pray for us'. An atmosphere of vague and gruesome uncertainty can be feit in this mystieal fourth movement.
The fifth movement Sortie is a magnificent toccata-like finale (providing music as the congregation leaves the church) where the powerful sound of the recurring chorale theme 'Tria sunt munera' is heard onee more on the organ pedal.

Performers on recording: Winfried Bönig playing the organs of the Cologne Cathedral