THE ROMANESQUE for organ 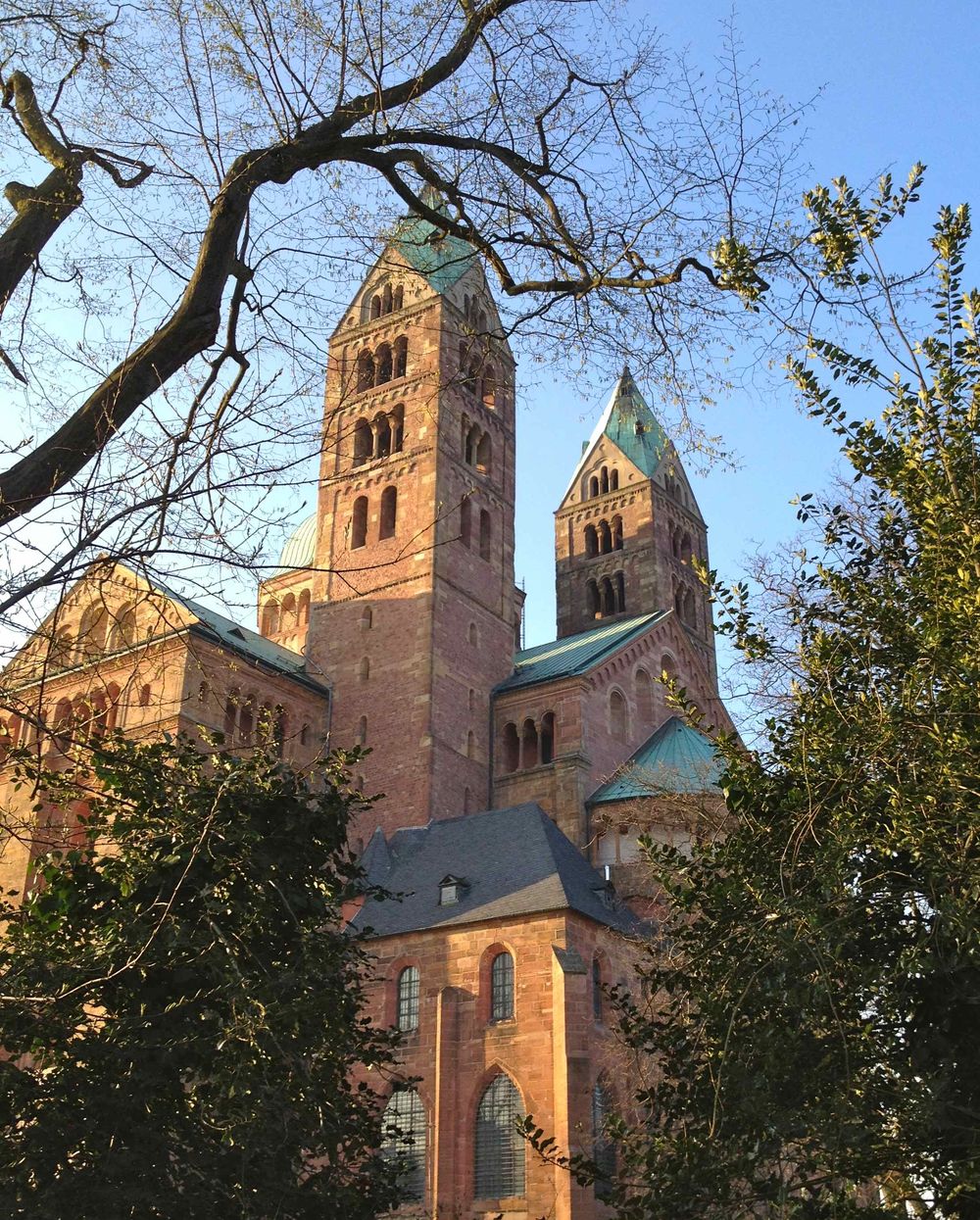 Introduction: The Organ Symphony No. 14 tries to capture the atmosphere and the design principles of the Speyer Imperial Cathedral in music. The foundation stone was laid in 1030 by the Salian Konrad II. Since then the cathedral became the tomb of many monarchs and thereby became a symbol of the medieval empire. It is dedicated to St. Stephen and the Virgin Mary, "the Patrona Spirensis" and has the status of a papal basilica.
With regard to composition techniques characteristics of the Romanesque architectural style are introduced: the "addition" of elements, their "grouping", the " penetration", as well as the atmosphere of the heavy, massive and castle-like. The Romanesque basic idea of the "round arch" is reflected in the preference for triple movements and the "crooked" triple meter. The outer movements of the organ symphony sit on the keynote G - by analogy with the four largest and oldest bells in the western bell tower with the tones g°, b°, des’ and f’.

Movement 1: BASILICA ROMANA – CAELUM NOVUM idealizes the type of the Romanesque basilica with three naves, which evoked celestial dimensions by its high vaults and thus wanted to refer to the Heavenly City of the Apocalypse, the "new Jersusalem". The Romanesque architectures adopted the cosmic building principles by the ratios 1:1, 1:2, 2:3 or 3:4. The height and width of the naves are likely in the ratio 1:2. Layouts are based on for example the proportions of the Temple of Salomon (according to the 1st Book of Kings, chapter 6), in which the 20 to 30 cubits described a ratio of 2:3. As the lengths of the nave towards the two aisles of a Romanesque basilica were built in a fifth ratio 2:3, the opening movement is composed in the form of A-B-A', that exactly reflect this ratio in its numbers of strokes per molding.

Movement 2: DAEMONION with its bizarre modulations and bright turns refers to the west front of the Basilica, where in the Romanesque demons, devils and strange creatures traditionally live. The East is the spiritual part of the rising sun. The West is the path to the dark. Archangel Michael ist the guardian of the western part, where mostly dragons and sculptures with grimaces or animal attributes (in the bestiary) are found. For example, the demons of Gottfried Renn on the main portal of the Speyer Cathedral.

Movement 3: BERCEUSE "SALVE REGINA" refers to the patroness Maria. The "Salve Regina" ("Hail Mary") is according to current research most likely attributed to Hermann Contractus. According to the legend, St. Bernard of Clairvaux is said to have added the line "O clemens, o pia, o dulcis virgo Maria" (Oh gentle, kind, sweet Virgin Mary) in the Cathedral - where he turned to the altar in three great leaps: in memory thereof three stone roses were covered in the floor. - The setting of the SALVE REGINA is a lullaby on triplet base and uses colorful chromatic harmony in the middle section. Its poetic feminine gesture refers to the Marian piety of the 11th century, which spread simultaneously with the "love of women" of the troubadours and the courtly love as well known. Melodic fragments according to the often chanted version of the Belgian Baroque composer Henri Dumont (1610-1684).

Movement 4: With regards to the numeric symbolism TOCCATA OCTOGONALE takes up the number "Eight", which is a significant number in the Romanesque: the 8 as number of perfection is being paid reverence in the crossing of the architecture, in the four towers, in the basic form of the octahedron. By the 2times2 times2 the first body is mathematically created. Theologically, the 8 is always seen as the exceedance of the seven days of Creation, entering the heavenly life. A massive Toccata of square elements was created by the addition and varying grouping of components, which expresses again the impact and heavenly dimension of the Romanesque basilica tying in the first movement.

Dedication: Cordially dedicated to Markus Eichenlaub, the organist of the world's largest Romanesque cathedral, the Imperial and St. Mary's Cathedral of Speyer

Press reviews for world premiere: -------------------- Attention: The following short Audiosnaps of movements 1+2 are just documentary recordings that were made by cell phone recording.