WITH THE COURAGE OF DESPAIR 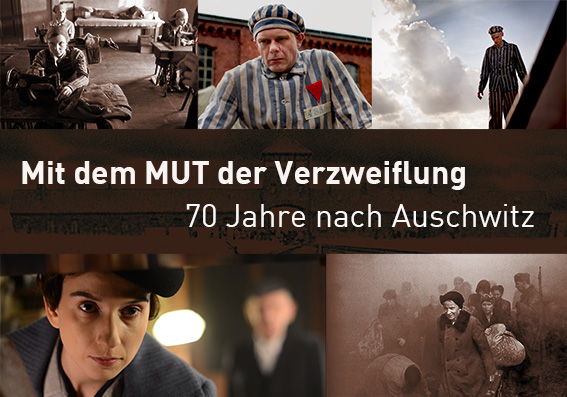 A documentary about concentration camp Auschwitz/Poland with staged scenes... emotional music with chant and violinsolo as contrast to horrible pictures.

Text/Lyrics by: Screenplay by Dirk Kämper

Introduction: Soundtrack for the 75-minute long scenic documentary MIT DEM MUT DER VERZWEIFLUNG 70 JAHRE NACH AUSCHWITZ (With the courage of desperation - 70 years after Auschwitz) that was produced for the German public broadcasting station 'ZDF'. The documentary included different play scenes and was hosted by Hugo Egon Balder whose mother Gerda Leyserson personally experiences and survived the horrors of the Holocaust.

Additional remarks: The soundtrack was recorded on the 22nd and 23rd of October, 2014 with Adrian Goicoecha Selfjord - Solovioline (*Norway 1987), Gabriele Steck (soprano), the Philharmonic Film Orchestra Munich, cond. and piano: Enjott Schneider. Additional electronics: Enjott Schneider, recording and mixing: Klaus Strazicky. The soundtrack includes, amongst others, the Jewish 'Kol Nidrei', as well as the Israeli anthem 'Ha Tikwa' - a very famous melody from the year 1888 that originated in the area of the Czech Republic.

Performers in movie: television premiere: 27th of January, 2015, ZDF on the occasion of the 70th anniversary of the liberation of Auschwitz