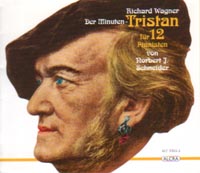 Introduction:
The original version for twelve pianists was developed in 1996 as a commissioned work for the General Music Director August Everding on the occasion of the opening of the Munich 'Prinzregenten-Theater': in only five minutes, the Wagner-like epic is presented provokingly in a colourful mix of tango, ragtime, and the waltz. Chronologically, the following motifs of Richard Wagner have been implemented: at the beginning the „Walkürenritt“ (The Ride of the Valkyries), answered by the basses with the „Fliegender Holländer“ (Flying Dutchman); then from „Tristan und Isolde“ (Tristan and Isolde) the motif of the escape and of course the Tristan beginning wit the Tristan chord, which is the starting point for the tango. After the motif of rage, the ragtime once again takes up the longing Tristan beginning and moves on to the death potion motif. The „Liebestod“ (love death) with the beat of the waltz wraps up the composition.
The version for two pianos was created in 2011 as a contribution to the 200th birthday of Richard Wagner.
The version for twelve pianos was released by Schott-Alcra 5503-2 LC 3853 in 1997 as a Single CD.