LACONIA - the German version of the film 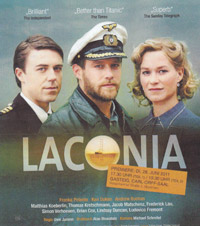 LACONIA is one of my best and my favourite film scores: the feature film produced by Teamworx leaves nothing to be desired with excellent actors and exciting shots on the sea and in submarines and passenger liners. The story of the ship that was hit by torpedo and then sank is unique and cost more lives than the sinking of the Titanic. And the music for it, with a combination of a large symphony orchestra and electronics such as sampling sounds, has also come to the high class through the inspiration given by the film. The booklet (reproduced below as illustrations) tells of all the details. Click to enlarge.
MUSIC GOT A NOMINATION FOR THE DEUTSCHER FERNSEHPREIS 2012

Introduction: 2x90 minutes, script was written by Alan Bleasdale, who is almost cultic in England. In a gripping two-part film (first produced jointly by BBC and ARD), Laconia tells the story of the English passenger ship Laconia (with 1800 Italian prisoners of war on board, among others), which was sunk in September 1942 by the German submarine 156 under the command of Corvette Captain Werner Hartenstein, but whose survivors were then rescued by this submarine... only to be tragically destroyed in the end. The narrative perspective is the view of the German Jew Hilda Smith (played by Franka Potente)

Additional remarks: Alan Bleasdale virtually ritual honoured in England wrote 2x90 minutes, screenplay. Laconia tells in an absorbing 2 divisor (for the first time about BBC and ARD together produced) the history of the English passenger liner Laconia (among other things with 1800 Italian prisoners of war aboard) which was sunk in September, 1942 by the German submarine 156 under leadership of corvette captain Werner Hartenstein whose survivor were saved, however, then by this submarine... to be destroyed, finally, nevertheless, tragically. Besides, narrative perspective the view of the German Jew Hilda Smith (is played by Franka Potente)

Distributor of movie: ARD and BBC