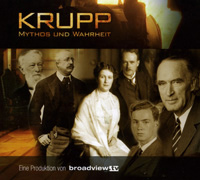 While the great ZDF three-part film KRUPP writhes 'in the half-shade', the two authors Sebastian Dehnhardt and Manfred Oldenburg take a clear stand: they bluntly highlight the special and positive aspects of this influential dynasty, and just as clearly the entanglement in guilt and collaboration with Hitler's Germany. Life is never linear ...that will be the lesson after this insightful film. With many interviews and facts.