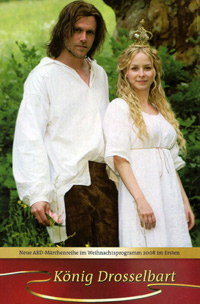 A great 2008 film adaptation of the fairy tale by the Brothers Grimm, freely expanded with colour values of the emancipation of women. Received awards and we still often broadcast, sold as DVD and streamed on the Internet or in media libraries. A top-class cast with Ken Duken in the title role and Jasmin Schwiers as Princess Isabella. Hubert Mulzer plays King August and Felicitas Woll the Princess Maximiliane. - Director: Sibylle Tafel with children's film Erfurt commissioned by the Hessischer Rundfunk. - The film music is elaborately composed with orchestra and soloists such as Gabriele Steck (soprano), Peter Maklar (guitar) or Sandro Friedrich (historical wind instruments). Furthermore, the children's choir of the Munich Cathedral Music sings the Drosselbart-Lied.

Movements: As well as the score there is a full playback and sing along playback for two songs:
The Drosselbart Song
The Isabelle Song

Introduction: KING DROSSELBART. PRINCESS OF GERANIUMS received the 'Robert Geissendörfer-Prize' on the 10.9.2009 in Leipzig in the category Childrens Films.