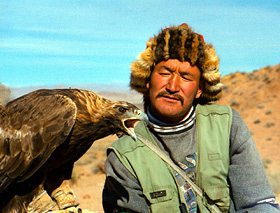 The film about the Eagle Hunters of Kazakhstan by Erik Zimen was my first film from the WILDWEGE series for ARD, produced by Bavaria Film Munich. My collaboration with the biologist and wolf researcher Dr. Erik Zimen (1941-2003) was touching and intense. He was the coryophee on the subject of "wolves" and was often compared to the chimpanzee mother Jane Goddal and the greylag goose father Konrad Lorenz (with whom Zimen also studied).
To record the film music I even had some Kazakh musicians in my recording studio with dombra, drums and singing. This very archaic and natural sound world was then lifted into a modern context by electronic means.