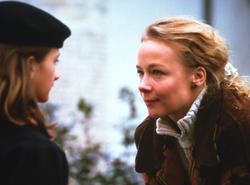 After his debut film SEKT ODER SELTERS in 1989 at the Munich Film Academy HFF and his graduation film DIE MECHANIK DES WUNDERS in 1992 - for both I was allowed to compose the film music - HIMMEL UND HÖLLE was his first feature film project in 1994. Hans-Christian Schmid trained his excellent and precise cinematic view on documentaries and then created oppressively "real" feature films...above all the cult film "23 - Nothing is as it seems"... which is one of my best and most beloved film scores.
HIMMEL UND HÖLLE - starring Katja Riemann - is a feature film that continues the theme that was already dominating in MECHANIK DES WUNDERS about the arch-catholic place of pilgrimage Altötting: the sometimes terrible consequences of a catholicism that has got out of control. The film describes how a girl comes under the influence of the village priest and religion teacher. It refers to a documentary case that took place in southern Germany and sees itself as a parable on seductiveness and as a psychogram of the seducers. Exorcism is no longer far off...

Additional remarks: with Katja Riemann, Hannelore Hoger among others