Film 7 from the ZDF-Series WILDER KAISER 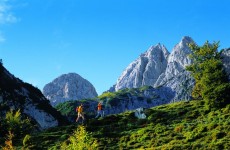 Additional remarks: from the TV-movie-series 'Wilder Kaiser' on ZDF