CD FROM DARKNESS INTO THE LIGHT - from the Trier Cathedral

with GOLGATHA for Trombone & Organ 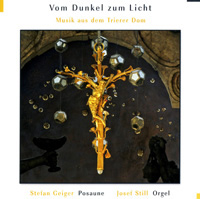 Stefan Geiger (solo trombonist of the NDR Hamburg) and Josef Still (cathedral organist at the Trier Cathedral) will play GOLGATHA, which is dedicated to them, among other things. A composition that takes up traditions such as the baroque Chaconne (but surprising in 7/8 time) or the heavyweight "Introduction" in Max Reger, but which is also modern in tone language. Mystical traits are unmistakably included, such as the 7x7 = 49 times sounding of the tone "c sharp" to refer to the 50 days from Golgotha to Pentecost. The booklet (printed in the photos below) gives detailed information.

Performers on recording: GOLGATHA by Enjott Schneider. Introduction and Chaconne for trombone and organ (for details see WORKS/GOLGATHA) played by Stafan Geiger/trombone and Cathedral organist Josef Still ond the Klais organ (1974 of the Trier Cathedral).