For a hundred years 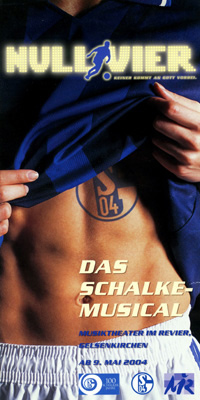 Introduction: Was created as a disco number for the musical 'ZeroFour: Nobody comes past God' and was heard on the 8.5.2004 at tge 100 jubilee celebration of FC Schalke in the filled arena, sung by members of the Revier Gelsenkirchen music theater (live broadcast by WDR cologne)

Performers on recording: see above, bonus track on the 'ZeroFour' CD (live recording from the premiere of the musical in the 9.5.2004): produced by Frankie Chinasky from artists & acts GmbH Munich in Pepper studios in Munich.
Available in the Falke fan-shop, without LC number