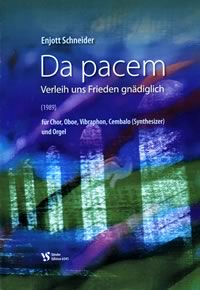 Press reviews for world premiere: NMZ (June 89): '...used very impressive avant-garde choral technologies and synthesizers in his work for the first time work 'Da Pacem' (Franzpeter Messner)
Première in Croatia (Zagreb) on the 9/22/1996: Mittelbayerische Zeitung (28.9.1996): 'It Was performed in Zagreb by the united choirs of Schierlings and Regensburg with 75 members and released first dismay, then, however, frenzied applause. Many concert-goers confirmed that they shouted during the time of the war often according to around the peace - as well as which is also expressed in the composition'