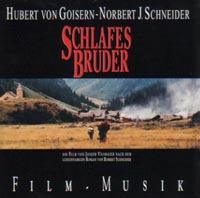 This film music has become important because the central "organ toccata" in the Organ Miracle (composed before the filming for the playback recordings) has now become a repertoire piece of the international organists. I had read the novel of the same name by Robert Schneider in India in 1993 (guest lecturer at the State Film Institute) and enthusiastically phoned my friend Jospeh Vilsmaier, "wonderful material, get the film rights quickly"... and so began a futile film production that dragged on for two years. In the last three months I then worked together with the Austrian rock musician Hubert von Goisern, which added another striking colour. This soundtrack CD was produced by Hubert von Goisern