for flute, organ and orchestra 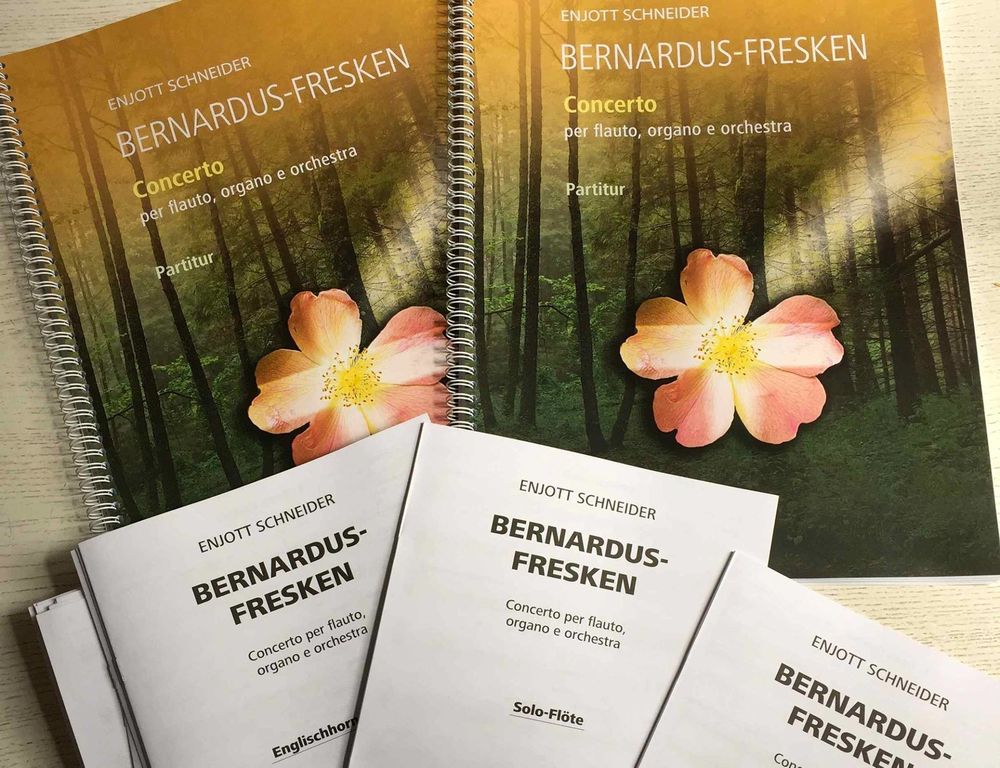 Introduction: Bernard of Clairvaux (1090-1153) - the "White Monk" and founder of the Cistercian Order - was the great figure of the 12th century, the "uncrowned pope and emperor of his time". He refused all episcopal dignities, he brought the mysticism of Mary (i.e. the devotion of the Virgin Mary) into play as antithesis to the mysticism of Christ and therefore he was also called "Doctor marianus". According to the legend he wrote the sequel of the "Salve Regina" ("Hail Holy Queen") named "O clemens, o pia, o dulcis Virgo Maria" ("O gentle, O pious, O sweet Virgin Mary") in the Speyer Cathedral (which is carved into the floor). - Nevertheless, Bernard of Clairvaux was far from being a mere emotional person, who is distant from thinking. Many of his letters, sermons and writings (surviving in more than 15 volumes) anticipate the radicalism of Meister Eckart: for example in statements like "You ask the Bible for information in vain, rather ask the experience" and "Trees will teach you things that no man will tell you!"
The novelty of the Cistercians was the focus on love as the highest form of truth and knowledge of God. God is no longer only the "Lord" and the man his subject. God and the soul are partners who love each other.
Bernard's piety was affective, sentimental and emotional. The worship of the Virgin Mary was a close step from the worship of the humanity of Christ. Bernard's enthusiasm for "Marienminne" (remembrance of the Virgin Mary) was fervent. By the way, his enthusiasm was consistent with the music of the troubadours at that time and the adoration of women.
The soloistic interaction of vigorous organ and gentle flute reflects the dual nature of Bernard of Clairvaux. Externally, he organized crusades and was a political strategist of the medieval Europe. Internally, he was a poet, who was thrilled by love and the veneration of the Virgin Mary.

ANNOTATIONS TO THE MOVEMENTS:
1: Rosa Canina
For Bernard the five petals of the dog rose (also called thorn rose, wild rose or rosehip) embody the five stigmata. "Rosa Canina" (dog rose) is a symbol of the Christ mysticism. The number "five" represents love in the symbolism of numbers of all myths, fairies and cultures: for example the annual 5-motion of the planet Venus and as a result the related structure of five petals of all Venus related plants like quince, vine stock and rose. All of these plants are globally known as symbols of love and wedding.

2: Wisdom of the trees
Experto crede: aliquid amplius invenies in silvis quam in libris. Ligna et lapides docebunt te, quod a magistris audire non possis. (letter to the English scholar Henry Murdec around 1125) - Trust the expert: you learn more important contents from the forests than from books. Trees and stones teach you all those things, which you will never be taught by teachers.

3 : Salve Regina (Hail Holy Queen) (antiphon)
The veneration of Mary by Bernard of Clairvaux is reflected in the context of the troubadour songs and the poetic adoration of women in the 12th century.

Additional remarks: Composite mandate of the Baltic Philharmonic Gdansk for the opening concert of the organ festival in
Olivs/Gdansk. The reference to Saint Bernard of Clairvaux results from the fact that the basilica and the monastery Oliwa was founded by the Cistercian order, which in turn was founded by Saint Bernard.