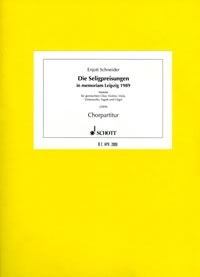 Instrumentation: Motet for choir, violin, viola, cello, bassoon, organ (strings can be performed by soloists but also by an orchestra)

Text/Lyrics by: The Gospel according to Matthew, chapter 5/3-12, translated by Martin Luther

Introduction: The composition was commissioned by the Nikolai Church in Leipzig for the 20th anniversary of the peaceful revolution in Laipzig on the 9th of October 1989.

Of great help to me with this composition was the work I did on the soundtrack for the film "The Miracle of Leipzig. We are the people" (broadview - TV Cologne with MDR and ARTE) from autumn 2008 until the recording on the 11th of January 2009, during which time I was confronted with pictures from 1989 and was plunged into the history of the time. Some motifs from the soundtrack were worked into the choral work, a fact that enhances its effect and expressiveness.

Dedication: Dedicated to the 20th anniversary of the peaceful revolution in East Germany