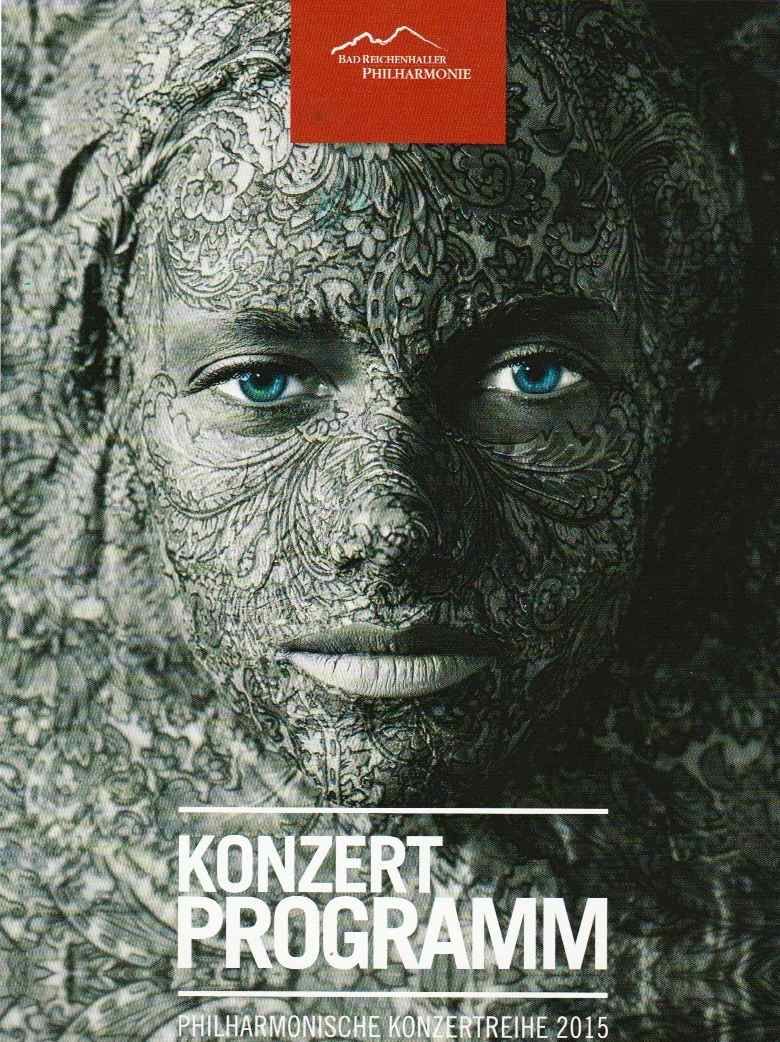 A violin concerto as lyrical as it is virtuosic on a spiritual theme: just as, according to Hildegard von Bingen's vision, the eyes are the window to the soul, so with the earth the dark blue lakes are the windows to the primordial vibration of our planet. A violin concerto that combines virtuoso gestures with the emotionality of epic themes, bringing an alpine landscape of lakes to the listener.

Introduction: Essay of the composer:

The title of the violin concert has its origins in a sentence expressed by the American philosopher Henry David Thoreau (1817-1862) in his main book 'Walden oder Leben in den Wäldern': "A lake is the most beautiful and expressive element of a landscape. It is the earth's eye. The one looking into it can measure the depth of his own nature in it."
Just like the human eye is the actual access point to a person's soul, according to Thoreau, lakes are the access points to the soul of our planet. In his book, Henry David Thoreau describes his experience at the Walden lake in Massachusetts, how he built a log cabin there and lived as an anchorite - an unadapted and oppositional 'natural apostle', whose thinking and actions were of a disconcerting congruity. Hermann Hesse said about Walden: The American literature, as bold and great as it is, does not offer a more beautiful and more profound book.

'Königssee', 'Mondsee', and 'Lago di Garda' represent individual forces and energies in accordance with the philosophy of Thoreau. The 'spiritual life of the earth' can be seen in particular clarity in the legends, myths and fairy tales surrounding those three lakes.

I: KÖNIGSSEE
Located in central Europe and with its fjord-like character and inaccessibility, this lake is truly unique - surrounded up to the water by mountains that project beyond the surface of the lake by 2,100 m and that are up to 1.800 m high vertically. The sevenfold echo at the lake is legendary. Wilhelm Goldbaum documented the characteristics of this truly majestic lake in his 'Essay der Gartenlaube' (essay of the garden shed) (1885): The Königssee lake has the reputation to be terribly serious as it is surrounded by shores that know no laughter. Instead, the lake is surrounded by naked stone and the cold loneliness of the forests. The Obersee lake is emphasised. The other end of that lake shows the world barricaded in front of you ... frightening quietness , grand silence. Furthermore, Goldbaum outlines the extraordinary individuality of the lake that also accounts for its most prominent appeal: there is not a single access point and at the point where the lake ends, there is no tourist destination, no exit to the world ... The Königsee lake is a truly proud lake. Many stories and legends surround the Königsee lake and its depth of 190 m - most of which are quite spine-chilling: during the so-called „Almer Wallfahrt“, the oldest documented mountain pilgrimage in Europe since 1635, a journey that takes pilgrims over the „Steinernes Meer“ (stone ocean) down to the lake, seventy people drowned on the 23rd of August, 1688 during a thunderstorm. In more recent years, on the 28th of January, 1964 an accident was documented where a VW Beetle disappeared and sank in the depths of the lake. In 1997, the submarine 'Jago' took photos of that VW Beetle and the driver 120 m down in the lake. However, since then, the VW Beetle has neither been seen again, nor recovered. Among the many legends, the legend of King Watze (also known as King Watzmann) has been the most prominent one: The king was known as an inhuman tartar and as a punishment, God buried him unter rocks and he became the co-called 'Watzmann'. His wife was turned into a rigid prong right next to him and his seven children became mountain forks. Even today, people refer to the 'Watzmann Massiv' as a family. In the legend, the Königsee was created as a collecting basin of the blood of this cruel ruler. The alp, where Watze's dogs fell to the depths of the lake is still called 'Hundstod' (death of the dog).
Even the sound of the violin has been documented in the legends: the steep cliff across the shipping pier 'Kessel' is still referred to as the 'Geigerwand' (fiddler's wall) because a strange giant was seen at the abyss, playing strangely depressing tunes that could be heard as far as 20 km away in the city of Salzburg. Without letting go of the violin bow, the giant jumped from rock to rock to disappear without being found by anyone. The strange melodies are also attributed to the yowling of the dying dog of Watze in the legend. People who are familiar with the weather in the area attribute the melodies to the whistling wind of the foehn / chinook storms that is still responsible for the unearthly sounds made by crevices and rugged rocks.

II: MONDSEE
With its sickle shape and 11 km in length, the legendary 'Mondsee' lake is very special in the powerful and talismanic 'Salzkammergut' region. The central legend tells us about a cruel ruler as well, one that tyrannised a village and its inhabitants. Warned by the Mother of God in a dream, the inhabitants are able to escape as the divine tribunal determines that the tyrant and village are to vanish in lightning, fire, and violent thunderstorms. It is said that the tip of the church tower has been seen time and time again in the dark green water at calm sea. The basis for this legend could be the fact that posts could be seen clearly just below the water surface in 1864. Meanwhile, the posts have been identified as remains of the pile dwellings of the Neolithic Age ( with many archaeological finds of an independent Mondsee culture). In 2011, the mysterious pile dwellings in the Mondsee became a UNESCO World Heritage Site.
Other legends report on the Untersberg gnomes. The gnomes used underground pathways to reach the old abbey where they would celebrate mysterious masses. The 'devil' is an image that is often mentioned, be it in the „Wilde Jagd“ (wild chase) in the air during the 12 nights, near the house called 'Teufelsmühle' (devil's mill) at an old road leading from the Mondsee lake to Thalgau, or in the legend of the 'Drachenwand' (dragon wall): In the prominent 'Drachenwand' that stands 1,176 m tall and that protrudes at the southwest bank of the lake, there is the 'Klausbachhöhle' (Klausbach cave). Inside that cave, you can find the 'Drachenhalle' and further north, the 'Nixloch'. Below the edge, there is the 'Drachenloch' (dragon's hole) which is a cultic sun hole. There are times when this sun hole draws a circular light trail in the shady landscape. In mythology, the 'Drachenloch' is attributed to the devil who created the hole in the mountain as he was punishing a thievish cook. The violin concert does not so much focus on the macabre image of the devil. Instead, it uses the myth of the mysterious and quiet 'marriage' of the moonlight and the dark water in this area as its main theme.

III. LAGO DI GARDA
The violin concert is able to utilise much more pleasant emotional energies here - sunny, even Mediterranean, characterised by mermaids and nymphs instead of demons. The ancient name of the Garda lake was 'Lacus Benacus', named after the God of the Water 'Benacus'. With a length of 52 km, the Garda Lake is the largest lake in Italy. The northern part is characterised by the 2000 m peaks of the Garda Lake mountains; in the southern part, you can find the wine-growing districts of Bardolino, Soave, and Valpolicella. Legend tells us that there once was Benaco, who left the water and went to the mountains where he fell in love with the blue-haired mountain nymph Engadina. Engadina lived together with gnomes in a little mountain lake. Benaco abducted her and promised her to give her a larger lake. In that lake, which she turned blue with her blue hair, Benaco and Engadina made love. The child they conceived was called 'Garda', the name patron of the lake. At the Punta San Vigilio, one of the most mesmerising locations along the lake, the legend about the unreturned love between the young Vergil and the nymph stella still surrounds the 'scoglio della Stella' (rock of the stars). The story concerning the origin of the name 'Limone sul Garda' refers to the nymph Phillis. Of course the many legends about the 'Lago di Garda' also include stories of a pact with the devil, dungeoned women, as well as gruesome accidents. One of the most persistent rumours of recent years is one about sightings of a monster living in the lake, similar to the Scotish 'Loch Ness'. – The third movement of the violin concert is in rondo and the recurrent ritornello represents the cheerful feminine atmosphere in the world of the water nymphs with lust for life and dance. Only the intermediate movements still reflect the dark and eerie color that is generally typical for the mysterious world of the lakes as „Augen der Erde“ (Earth's Eyes): unfathomable, with messages from the distant past, leading to the depth - down to the „Seele der Erde“ (soul of the earth).