AT THE EDGE OF TIME 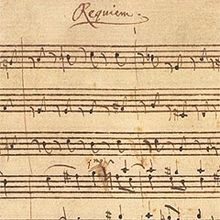 
At the edge of time is a tribute to Wolfgang Amadeus Mozart: the keynote, characteristic figu­ res and motifs from the Requiem KV 626 are woven together while a simple melody on the oboe traces a path through this emotive texture. A furious middle section inspired by the rhythms of the Dies irae leads with increasing intensity to an explosion of sound of shattering force, followed by a sudden silence and void. Over a long pedal note the music trembles one last time with a quotation from Mozart's Lacrimosa that matches the length and fragmentary form of the last piece of manuscript the composer left behind him. He died soon afterwards: there are intimations here of TIME'S DARK ABYSS. The piece was written in 2006 to mark the 250'h anniversary of Mozart's birth.

Introduction: Advice on interpretation:
The three sections each need to have quite distinct tempo and registration. Section A bars 1-99 (vibrations around the dominant A with faint musical quotations) should sound ca/mo and remain mysteriously soft throughout. The continually
ehanging tone colours and dynamic shading are important here. Section B bars 100-241 (the furious middle section in the tempo ofthe Dies irae) should be eompact and oppressive, like an unstoppable machine, played at a tempo of c. 150-160. This seetion ends with an explosion of sound fff. which then ebbs away
(with skilful reduction of stops) to a pianissimo. Seetion C bars 242-315 (concluding over the tonic D) is to be played very quietly and should
sound as strange and mysterious as possible (using unconventional combinations of stops, including stops drawn halfway out on organs with mechanical action). This section ends with Mozart's Lacrimosa, where a crescendo to aforte is followed bya last sigh and then nothing but darkness.
Performing this piece requires a large organ with at least three manuals, identified as G. = Grande Orgue, P. =Positif and R. =Recit. Special features include beats on the triangle mar­ ked at the beginning and end, to be played by the organist (ad libitum), and jamming the keys for a aQ.d d: the keys are made to keep sounding by wedging in a penei!. These exten­ ded notes may be coloured with the use of the swell pedal or by subtle changes in registra­ tion. Where specific manuals are indicated, these are merely suggestions. On organs with a greater number of manuals it will be possible to achieve a far richer range of eolours in the sound: here it may be useful to consult the score of the orchestral version bearing the same title.

An original contribution to Mozart's year 2006 is Schneider's 'At the edge of time'. He digs at borders, the borders of the time, life and the music. Mozart's incomplete requiem, with its mysterious history serves Schneider as an spring of inspiration which brings movement patterns and motifs. The tonic is mysteriously quiet, with half tones and varying tonal and dynamic shadings. An oboe voice raises itself over and over again from it. In the middle section this irae tempo bursts out idynamic Allegro assai, increases to shaken sound concentrations, then to the quiet finale. The piece ends with Lacrimosa Mozart, with foreign Pianissimo clusters.