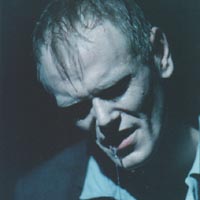 Text/Lyrics by: Josef Röd (after his film by the same name)

Introduction: The opera is a unique piece of musical history: a film becomes an opera. The libretto is by film maker Joseph Rödl, who reworked his opera-friendly film (distinguished in 1977 by the Federal Film Award) and who directed the first performance at the Regensburg Theatre (conductor: Rudolf Piehllmayer). It os a chamber opera, but can also be played with a large string orchestra in a large opera theatre. The story - based on real facts - is about the village idiot Albert who, offended by mockery and out of longing for his deceased mother, chooses to commit suicide.

Press reviews for world premiere: Süddeutsche Zeitung 22.1.1999: ...An attempt at C-sharp opens Enjott Schneider's opera 'Albert - Why?'. And the sounds circling round a tone provide claustrophobic narrowness. Schneider has selected a strong history for his opera' .