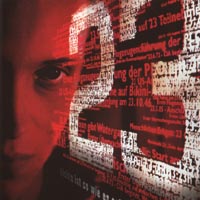 The film "23 - Nothing is as it seems" by Hans-Christian Schmid is one of my favourite films and best soundtracks, recorded with the City-of-Prague-Orchestra, with the wonderful sound of the glass harmonica (played by Dean Wilmington) and with music electronics developed over long periods of time. The dramaturgy: Synthesis sounds stand for the mysterious around the "Illuminati myth" and the world conspiracy...and are increasingly replaced by the warm orchestral sounds, the more the ominous death and disappearance of the protagonist Karl Koch occurs at the end of the film.

Introduction: After his debut film SEKT ODER SELTERS in 1989 at the Munich Film Academy HFF and his graduation film DIE MECHANIK s uDES WUNDERS in 1992 - I was allowed to compose the film music for both - "23" was a daltimative feature film project that also enjoys the greatest international recognition. . Hans-Christian Schmid had trained his excellent and precise cinematographic eye on the documentary film and now created oppressively "real" situations. In "23" the pair of friends is brilliantly cast with the actors August Diehl (as Karl Koch) and Fabian Busch (as David). Karl Koch is a young man possessed...by the "Illuminati" as the world-dominating conspiratorial community with their "secret number 23". Inspired by Robert Anton Wilson's "Illuminati" trilogy he dives into the unreality between computer and the power game of media and secret services. A thriller... like experiencing the truth in a nightmare.