PRACTISED QUANTUM PHYSICS: EVERYONE IS CONNECTED WITH EVERYTHING

Man is not only a body, and not only a soul (mind). He is, above all, SPIRIT (spiritus), and is connected to the universe (whether it is a galactic macrocosm or a subatomic microcosm) by means of this organizing principle of the vibrating energy. The visible reality is Maya, an illusion, a facade. The true reality is our vibrating patterns (and 99% vacuum) that we and the world are built of.... According to the laws of vibration and the language of oscillations, which are also THE LANGUAGE OF MUSIC.

In South Africa, the cradle of the first people, we can find millions of 200,000-year-old stone temples which are the energy circles of long forgotten world events... The knowledge of these free energy currents - which are nothing but ultrasonic patterns of musical sounds - can still give infinite strength and inspiration today. "Change your life!" - as an introduction, today I name, from the flood of knowledge, two books written by an era-defining researcher, sound editor, musician and singer Michael Tellinger: "African Temples of the Anunnaki – The Lost Technologies”, 2009 (German: “Die afrikanischen Tempel der Anunnaki“, 2015) with such breathtaking and irrefutable series of photographs and: " Slave species of the gods: The secret history of the Anunnakis”, 2005 (German: “Die Sklavenrasse der Götter. Die geheime Geschichte der Anunnakis”, 2013).

There are many things to report on in the news at the end of 2016 and the beginning of 2017 - on music, concert experiences in Philharmonic Orchestras with standing ovations, new compositions, prosperous friendships and encounters. A special reference to the new CD "FATAL HARMONIES - works for cello & orchestra", my WERGO CD No. 8 with László Fenyö and the DSO German Symphonic Orchestra Berlin (cond .: Ariel Zuckermann). From the emotional concerts I name the world premiere of  "Organ Symphony No. 16 MARTIN LUTHER" (Johannes Quack, organ, October 2016 in Cologne), first performance of the world premieres of "Icarus. Desire for light" with Otto Sauter (piccolo trumpet) and the Philharmonic Orchestras in Kiev and in Dnepopedrovsk (Ukraine). After several New Year's concerts starting with "Teatrissimo" (Theater Regensburg), the 10-city tour "Summit Conference" of the Federal Youth Orchestra and the National Youth Ballet (conducted by Alexander Shelley, choreography by John Neumeier) from the city of Lübeck to Hamburg State Opera, Philharmonic Hall Essen, Berlin Philharmonic Hall (with digital hall worldwide), Semper Opera Dresden, where my symphonic poetry “A solid castle” was danced as an emotional final ... In February 2017 the 7-city tour followed with the world premiere of" BERLIN PUNK" for four saxophones (the quartet "Clair Obscur" from Berlin) and orchestra (Nordwestdeutsche Philharmonie/Northwest German Philharmonic Orchestra, cond.: Yves Abel)...the audience as well as the press were powerful-vital-virtuoso and got carried away to ovations.

Then, in March 2017 the world premiere of the double concert “DREAMDANCERS” composed for and performed with the trumpet players Sergei Nakariakov and Otto Sauter, a concert tour from the Siberian Art Festival in the Philharmonic Halls Novosibirsk and Krasnoyarsk (cond.: Vladimir Lande/Russia) to the Festival in Gdansk with the Baltic Philharmonic Orchestra Gdansk/Poland (cond: Vag Papian/Armenia). These concerts were also associated with “lectures/master classes composition today“ at the conservatories of Dnjepopedrowsk and Novosibirsk.

In addition to the major philharmonic events, the intimate concerts and world premieres were equally important: "Obscuritas" for the guitarist Stefan Barcsay (Augsburg, December 2016), the string trio "Our Hope is blue & green" for a Chinese-German concert Hamburg (with Frank-Walter Steinmeier and Deputy Prime Minister Liu Yandong), the "Pavane" for the English horn (Dominik Wollenweber / member of the Berlin Philharmonic Orchestra) and the saxophone quartet ("Clair Obscur" Berlin), the concert piece "RA" (based on the Egyptian god of light) for 10 traverse flutes with the Munich Flute Ensemble (International Days of Flute Munich), or two performances of "Brahm’s Passacaglia occasionally relooped" with the "Taschenphilharmonie Munich" (cond .: Peter Stangel). Very emotional: Michael Leibundgut and the New York Glassfarm Ensemble with Yvonne Troxler made a Swiss tour in November 2016 (Zurich, Baden, Basel, etc.) with my composition "Robert Schumann dream trip". I was also particularly pleased with the new cooperation with the Swiss conductor, Simon Gaudenz, who conducted my conert “Changes” so brilliantly with WuWei as Sheng soloist, at the Jena Philharmonic, conducted my concert "Changes" with WuWei in the Philharmonic Hall Jena at the end of March so brilliantly, that it immediately lead to a new projects and a world premiere (again in the beloved Krasnoyarsk/Siberia): YIN & YANG for Sheng and Orchestra.

The energy really seems to be endless (creating from the holistic sources) and it also allows much more: film music productions such as the thriller "Mordkommission Königswinkel/ Homicide Division Königswinkel" (first broadcast ZDF on July 10th, 2017) or 40 new episodes for the animal documentary of the Hessian broadcast "Giraffe, Meerkats & Co". Then also activities for youth development: from the jury of the EZM (Edition of Contemporary Music in Cologne) up to the founding of the "Musikfonds eV" in Berlin (for which the Federal Government will provide 1.1 million per year by the Culture Minister Monika Grütters) or the jury of the International Composition Competition "Choral and Organ Music". During this competition in Rome (which was held in the Vatican Institute for church music…in midst February under already ripe mandarins!) I had the possibility to get to know a series of fascinating musical personalities, from the Pope’s organist or the Polish composers Jan and Pawel Lukashevski, to Stephen Layton (the conductor of the legendary Choir of Trinity College Cambridge) or the Baltic shooting star of the choral scene Eriks Esenwald. These meetings inspired me to a "Ubi Caritas" for an a cappella choir, which was already premiered by the Figural Choir Bonn (conducted by Reiner Schuhenn) on Good Friday 2017. In April, the German Music Author Award of the GEMA was awarded in Berlin: very emotional to give the award to the lifework prize-winning actress Sofia Gubaildulina (Kent Nagano held her laudatory speech). In the period between the end of 2016 and April 2017, many new compositions were created: I would like to highlight the percussion concert " Geheimnis der Bäume / Secret of Trees" (world premiere in June with David Panzl / Vienna), the “Luther Kaleidoscope” for soprano, baritone and the Baden-Baden-Philharmonic Orchestra (premiere at the Black Forest Music Festival 2017) and a "Water Music: Un Viaggio Fiorentino da Giotto a Puccini", which will spectacularly be performed by more than 100 musicians in boots on the Arno as well as at the left and right banks of the Arno… and the Austrian soprano Eva Lind standing on top of the Ponte Vecchio at the “Maggio Musicale / Italian Brass Weeks” in Forence... 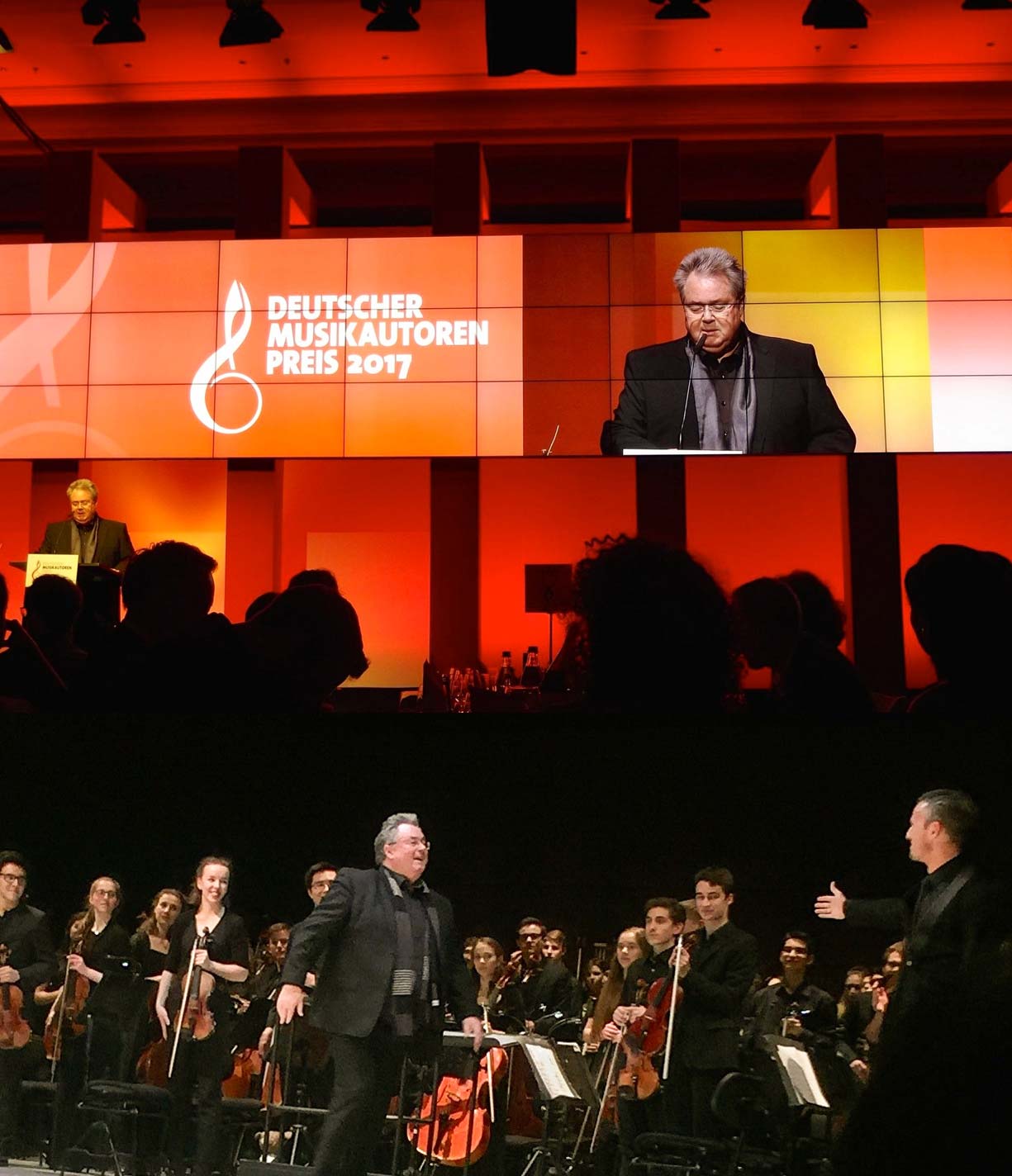